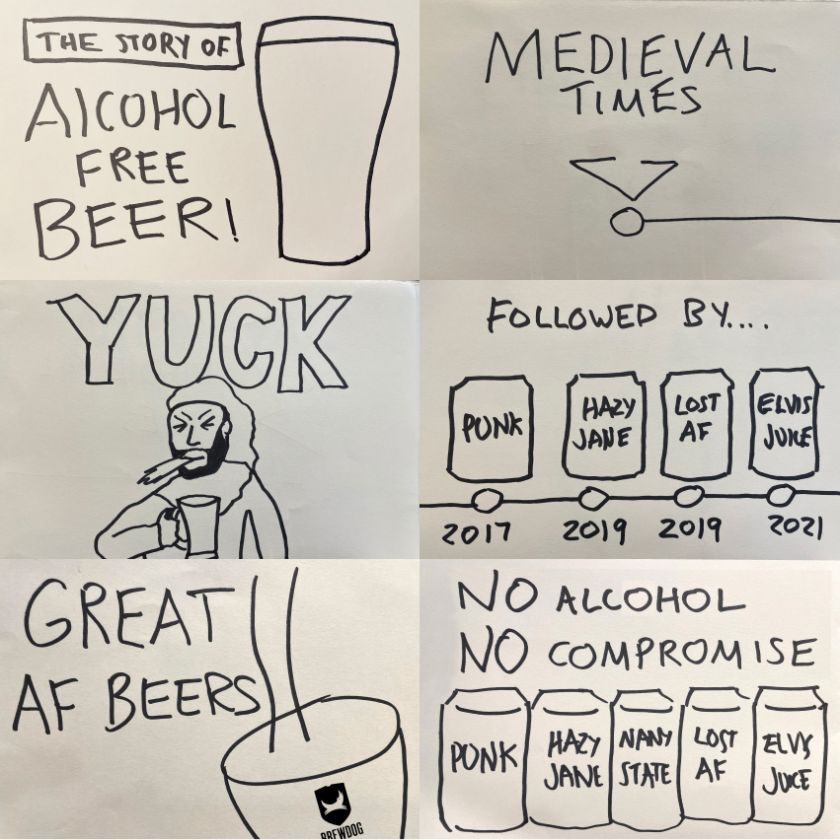 In the spirit of Dry January, BrewDog has gone all in on promoting its alcohol-free range, leading with a new entertaining and educational graphic animation designed by Shoreditch Design Studio.

and BrewDog have partnered together on past projects, but Design Director Tim Lane told Creative Boom that he wanted this newest animation to feel different from its previous collaborations. Rather than following in the footsteps of past Brewdog animations, which leant into a stop-frame style, Lane and his team went a different direction, aiming to set Brewdog’s AF range apart from the crowd while showing off its taste and little-known history.

“We tell the history of alcohol-free beer, using kinetic type and playing with the idea of BrewDog being the first brewery to make alcohol-free beer that actually tastes good. All with a very BrewDog-type attitude,” Lane told Creative Boom.

It was important to get the approach to alcohol-free beer right. Lane told Creative Boom: “For a multitude of reasons, AF beer is becoming much more popular than it has in the past, so we wanted an animation that would appeal to drinkers and non-drinkers alike.” He’s right – recent studies have shown a serious shift in attitudes toward alcohol – Gen Z drinks less on the whole, and of 18 to 24-year-olds don’t drink any alcohol at all.

Lane told Creative Boom that as a result of the shifting tide for alcohol consumption, BrewDog had seen huge growth for its no-alcohol range, and the animation is designed to tap directly into that demographic: drinkers whose connection to Brewdog’s irreverent spirit and quality taste transcends alcohol content. 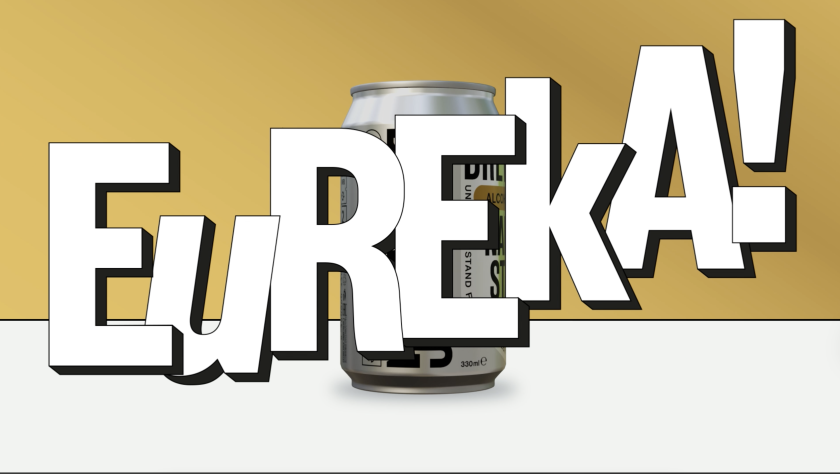 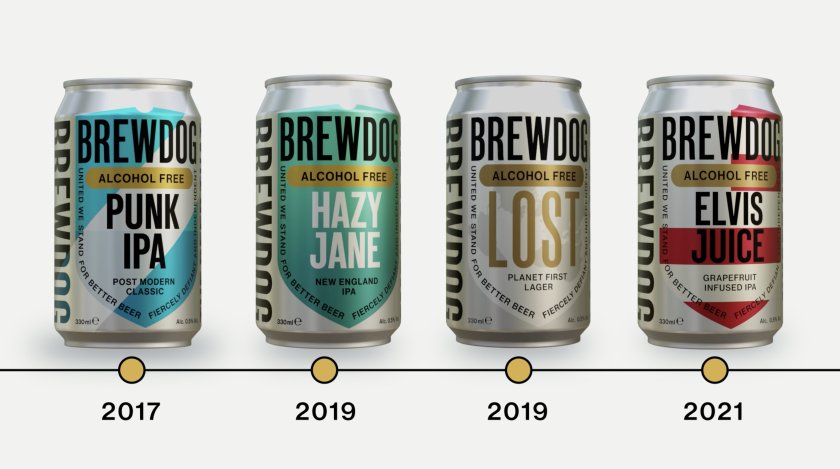 In the new animation, the story of alcohol-free beer unfolds through a graphic timeline that succeeds in being educational without losing any of Brewdog’s signature playful bite. By positioning Brewdog’s alcohol-free range as the first no-alcohol beer that tastes good, Lane and his team were cleverly able to chart the evolution of taste for alcohol-free beer.

Lane explained: “After doing some research, I found that alcohol-free beer originated in Medieval England and then had a resurgence in Prohibition New York. I thought we could play on this. The concept was to create a timeline showing the history of AF beer and how Brewdog were the first brewery to actually make it taste good.”

The script plays with each era of evolution for no-alcohol beer: a medieval Knight spits out his no-alcohol bier pronouncing “Fie” and saying it tastes like “dragon’s juice”, while a Prohibition-era mobster rejects his alcohol-free beer with a “get outta here!” – all leading up to the creation of BrewDog’s flavourful alcohol-free range in 2009. 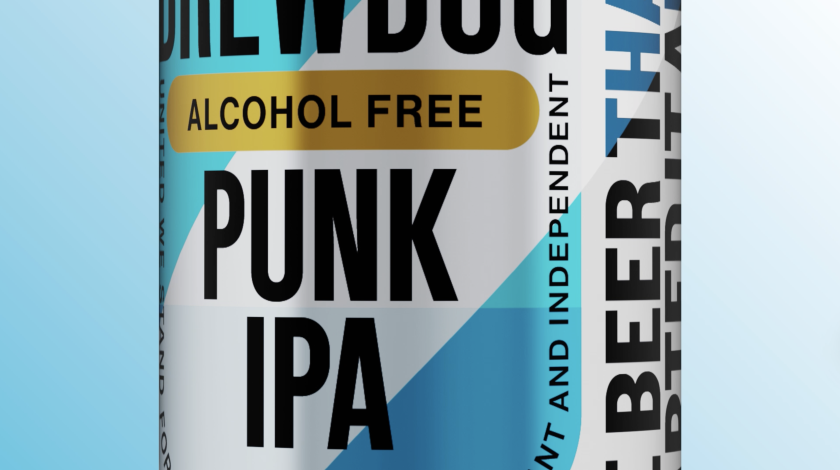 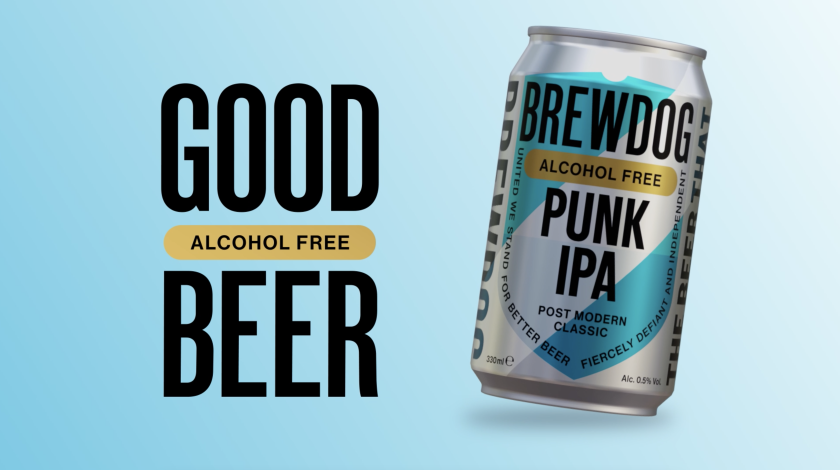 The entire piece is brought together through playful kinetic typography, putting a fresh spin on BrewDog’s recognisable branding by adding movement to the brewery’s familiar fonts’ colour palette. It’s also the first time that BrewDog’s alcohol-free tagline “No Alcohol, No Compromise” has been used outside of the packaging, making the spot a particularly strong brand asset.

Lane also shared an early storyboard sketch for the animation with Creative Boom and a little insight into his personal process: “I always revert to pen and paper for things like this, so I don’t get too fixated on the execution before the concept is fleshed out.”

The final product certainly echoes Lane’s early sketch while also illuminating the evolution that took place along the way – giving a glimpse into the creative history behind the animated timeline. 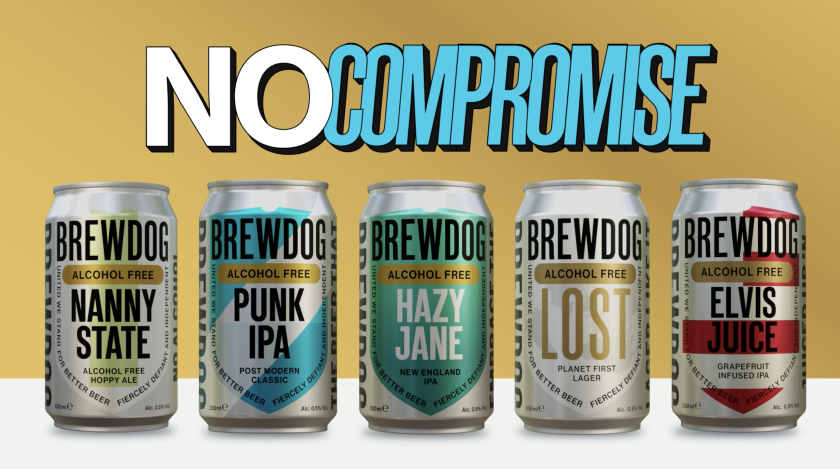