Intensely black, monumental in scale and strikingly minimal, the 21st Serpentine Pavilion, , by the American artist is perhaps the most daring and uncompromising of all the pavilions that have been erected outside the ’ main building in Hyde Park over the years. Gates’ Black Chapel is not the most accessible architectural concept of the Serpentine pavilions: The artist does not spoon-feed visitors how to engage with it. “It’s a vessel for people who choose to come together,” Gates explains. Unlike other pavilion designs, this one seems to require a certain level of maturity from participants to be fully understood. 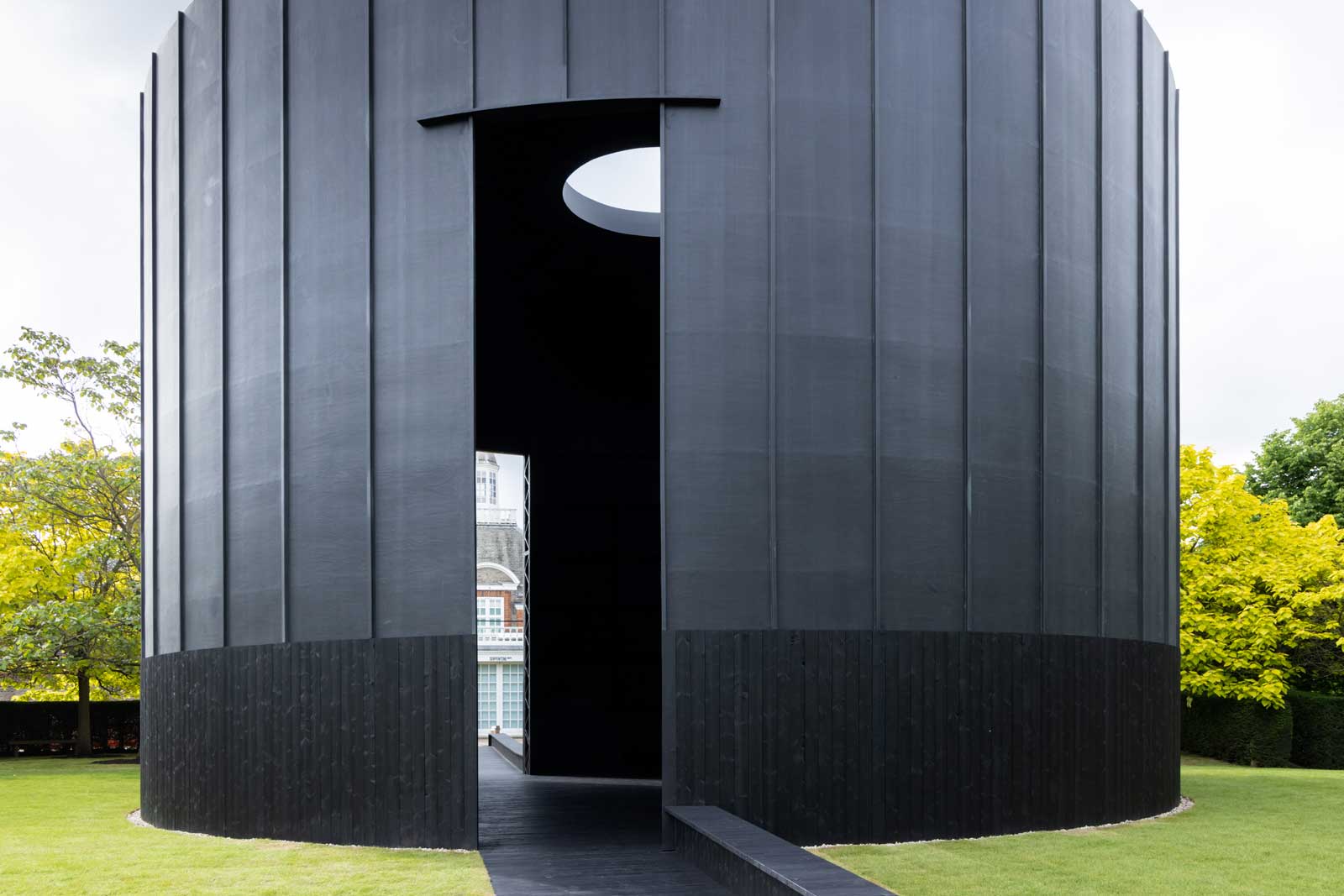 This year’s commission is the first time in the program’s 21-year history that a non-architect has been solely entrusted to come up with the design for the pavilion. Before starting his career as an artist, Gates studied urban planning and conservation, so he is more than familiar with thinking about and working with the built environment. Even so, the artist remains humbled by the commission, which he describes as “an act of faith in itself,” during his speech at Black Chapel’s opening.

Theaster Gates is equally known for his exuberance for clay as he is for the social work that is characteristic of his artistic practice, through which he transforms neglected spaces in underserved and underfunded areas. In , Gates has made spaces available for use by local residents as a means of strengthening the community through urban spaces that accommodate cultural programming.

Acknowledging spaces across London that have been used by equity-deserving communities, particularly immigrant groups, was a theme explored in the designed by Sumayya Vally of . Vally’s pavilion design implied multiplicity, with various architectural elements deconstructed, cut, spliced and put back together under one roof. On the other hand, Gates’ pavilion is defined by its singularity. 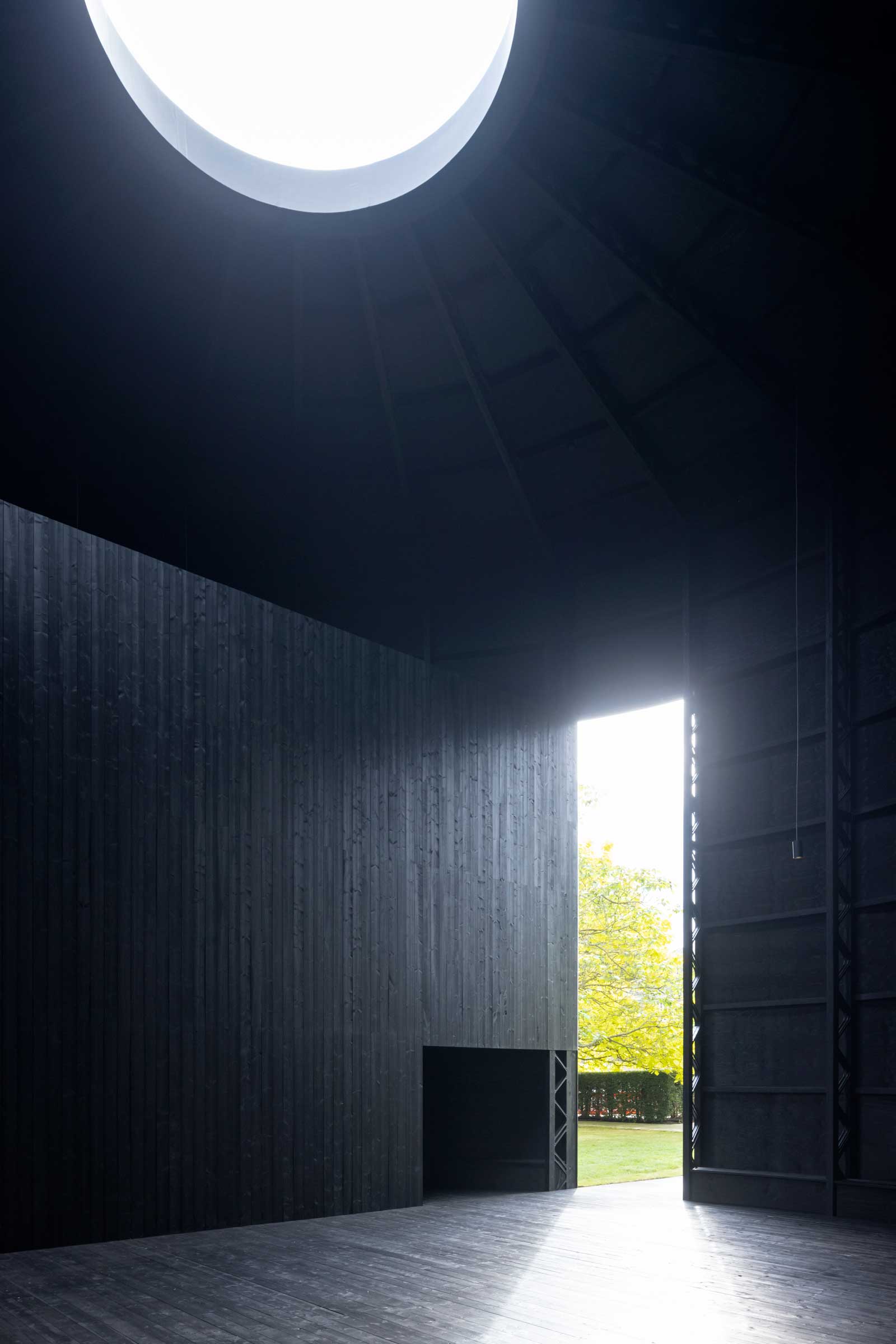 The focal point of Gates’ pavilion is an empty, hollowed-out space, with a patch of natural light that enters the space through a circular opening at the apex of the domed ceiling and slowly sweeps across the space, marking the passing of time. The light reaches a series of paintings made by Gates, using “the material of [his] ancestors,” which are hung on the walls of the cylindrical chapel.

The paintings, which make up the artist’s Seven Songs series, are a homage to his late father, a roofer who Gates says taught him everything: “His vocation has become my vocation.” The paintings are made with bitumen sheets seamed together with a torch (a typical roofing material and fabrication method) and covered in an aluminum silver paint, which shimmers as the light hits it. It’s interesting then to hear Gates describe the paintings as part of the structure: “I wanted to bring a portion of the roof inside and put it on the walls. 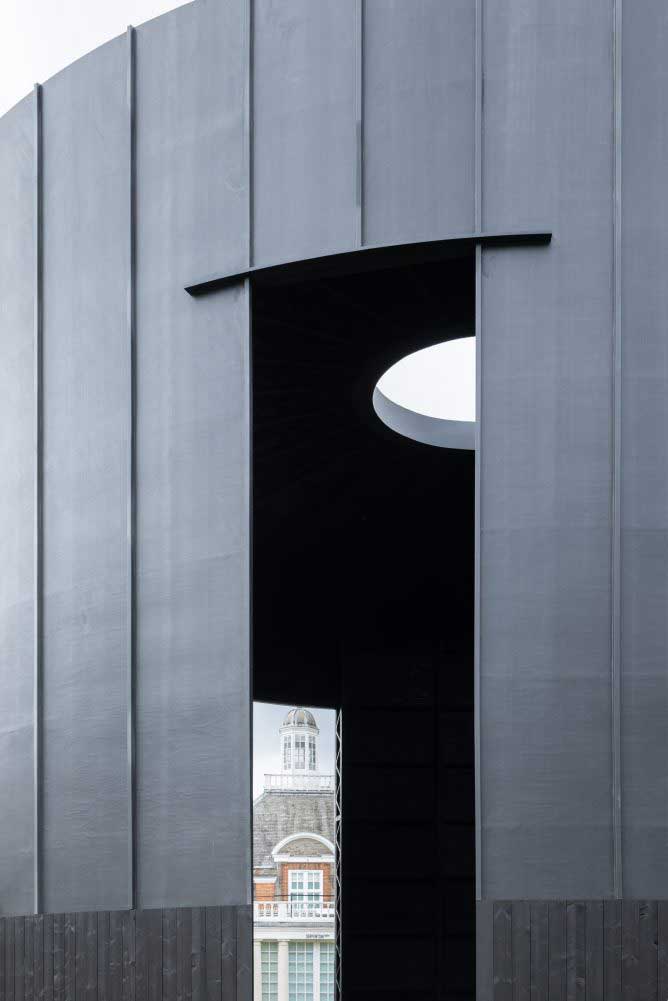 But these paintings are not the central experience of the pavilion, unlike the Rothko Chapel in Huston, which Gates cites as inspiration for his own Chapel. The benches in the Black Chapel are integrated into the walls, such that if a visitor were to sit to take in the pavilion, the paintings would be behind them.

Instead, the visitor’s focus is on the space framed by ordinary building materials: timber boards, two-by-fours, steel trusses, industrial screws and bolts — all impeccably assembled together without a hint of any mishap. Though the construction has been painted black, the structure itself feels light and airy, in part because Gates has intentionally left it empty, such that it could serve as a space for “deep reflection and deep participation.” 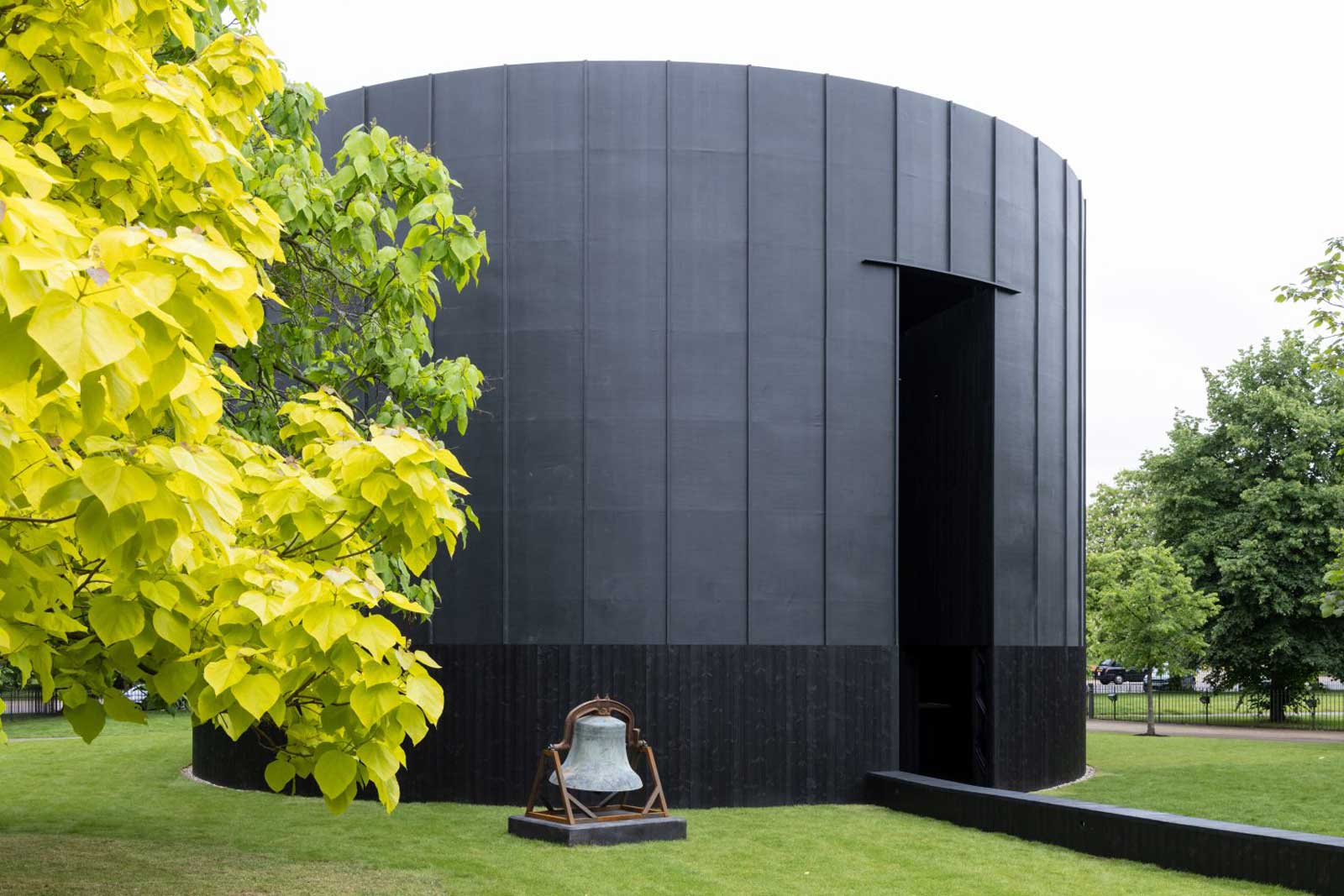 Whereas Sumayya Vally dispersed fragments of her pavilion across London, Gates brought a fragment with him from Chicago to the site. The fragment is an operating bronze church bell that was salvaged from the St. Laurence Catholic Church, which once stood in Chicago’s South Side. This particular bell, which now sits outside of the Black Chapel’s entrance, has been travelling since 2015: It was part of a small chapel Gates made using demolished building parts of the church as well as a statue of Saint Maurice for the Art Biennale in Venice that year. Gates explains that “the bell is a call back to ourselves. A call back to the possibility of an interior life, a sacred life, a call back to rituals. It’s about acknowledging how useful the invisible world is to the visible world.”

While the pavilion is conducive to the type of reflection that Gates describes, the formal references that Gates makes to the chapel as “a memorial to the history of making,” are all but lost to architectural refinement. His paintings are the only part of the project that clearly attests to the history of making. Justine Simons, Deputy Mayor for Culture and Creative Industries in the UK, said in her speech at the opening that the craft from her hometown, Stoke-on-Trent, is “made with dirt.” It would have been nice to see a bit more of dirt, or the grit and grime that are part and parcel with the hard labour that Gates references, in a neighbourhood as well-heeled as South Kensington. 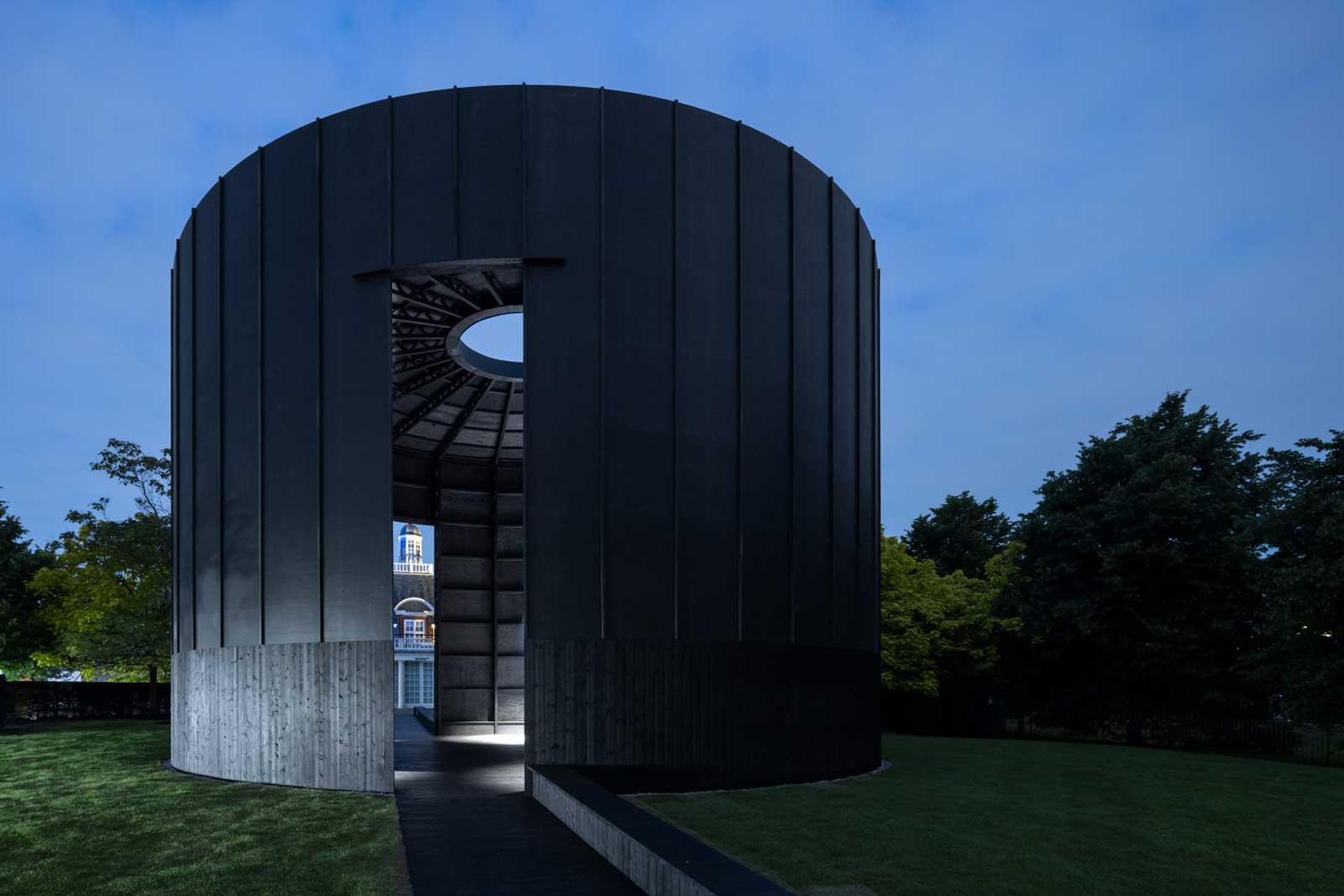 The Black Chapel opens on June 10 and is on view at the Serpentine Gallery until October 16, 2022.

Yuki Sumner is an architectural writer and researcher based in London. Sumner is currently working on a new book, documenting the lives of artists and architects working in rural Japan.