A Living Room for Canada’s National Film Board

Since its inception in 1939, the (NFB) has remained a public agency with a distinctly public purpose. Over the decades, the federally funded office has produced a wealth of documentaries, animated films and — in recent decades — digital media, many of which became part of the national consciousness. From the 1988 animated classic The Cat Came Back to Sarah Polley’s tour de force Stories We Tell, the agency’s support has carved out a place for Canadian cinema on the international stage. And in downtown Montreal, the NFB now boasts a welcoming stage of its own. 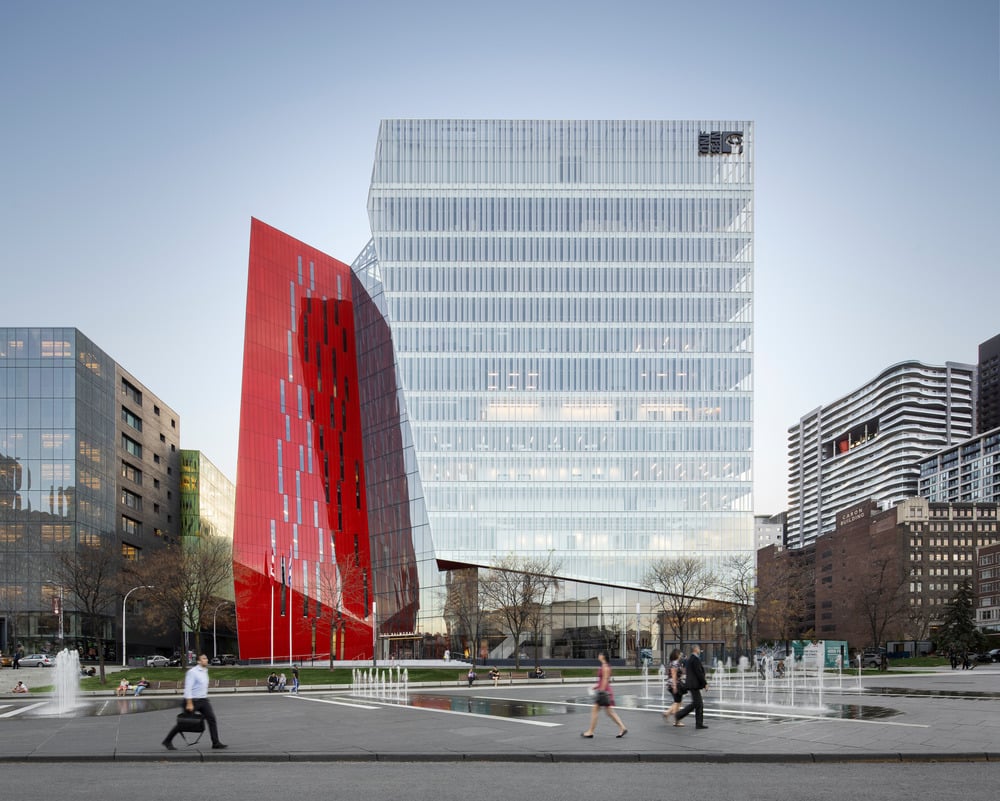 Designed by Provencher_Roy, the Îlot Balmoral complex was completed in 2019. PHOTO: Stéphane Brügger

While the NFB has long played a crucial role in nurturing Canada’s cultural landscape, its physical presence belied a leading institution. Until 2019, the NFB was headquartered in a sprawling suburban complex flanked by a cluster of car dealerships and parking lots. That year, the agency moved downtown, becoming an anchor tenant of the showpiece Îlot Balmoral office complex in Montreal’s Quartier des Spectacles cultural district. Designed by , the eye-catching office tower devotes five floors to NFB offices, along with a planned reception area to facilitate new public and industry programming. 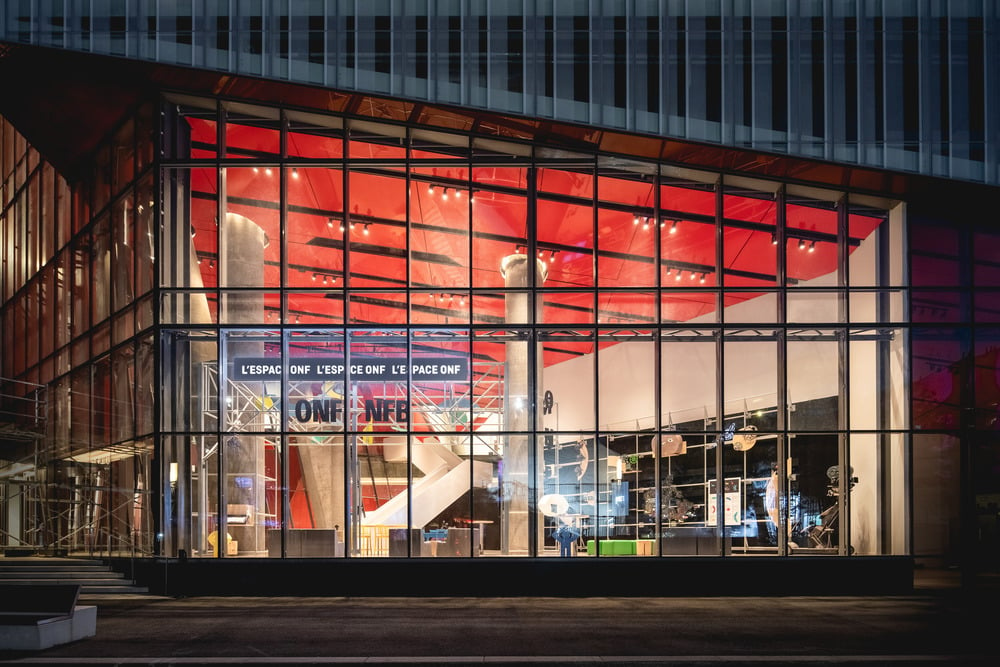 The 225-square-metre lobby is now animated as a public face for the NFB. PHOTO: Raphaël Thibodeau

After the tower was completed in 2019, the building’s lobby — and office spaces — were fitted out later, with the full opening also delayed by the COVID-19 pandemic. Today, an energetic new space meets the public realm, inviting visitors, tourists and film professionals into the building. 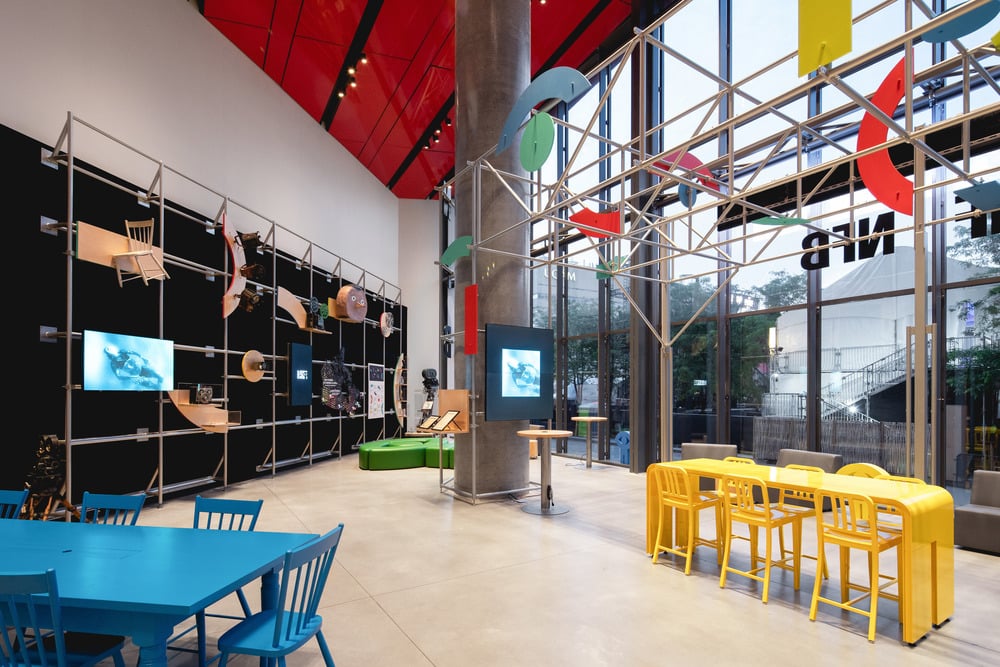 Led by local studio , the airy space is anchored by simple furnishings in bold primary colours. Designed to operate as a lobby and exhibition space as well as a venue for film openings and receptions, the colourful room serves as the NFB’s new public face. 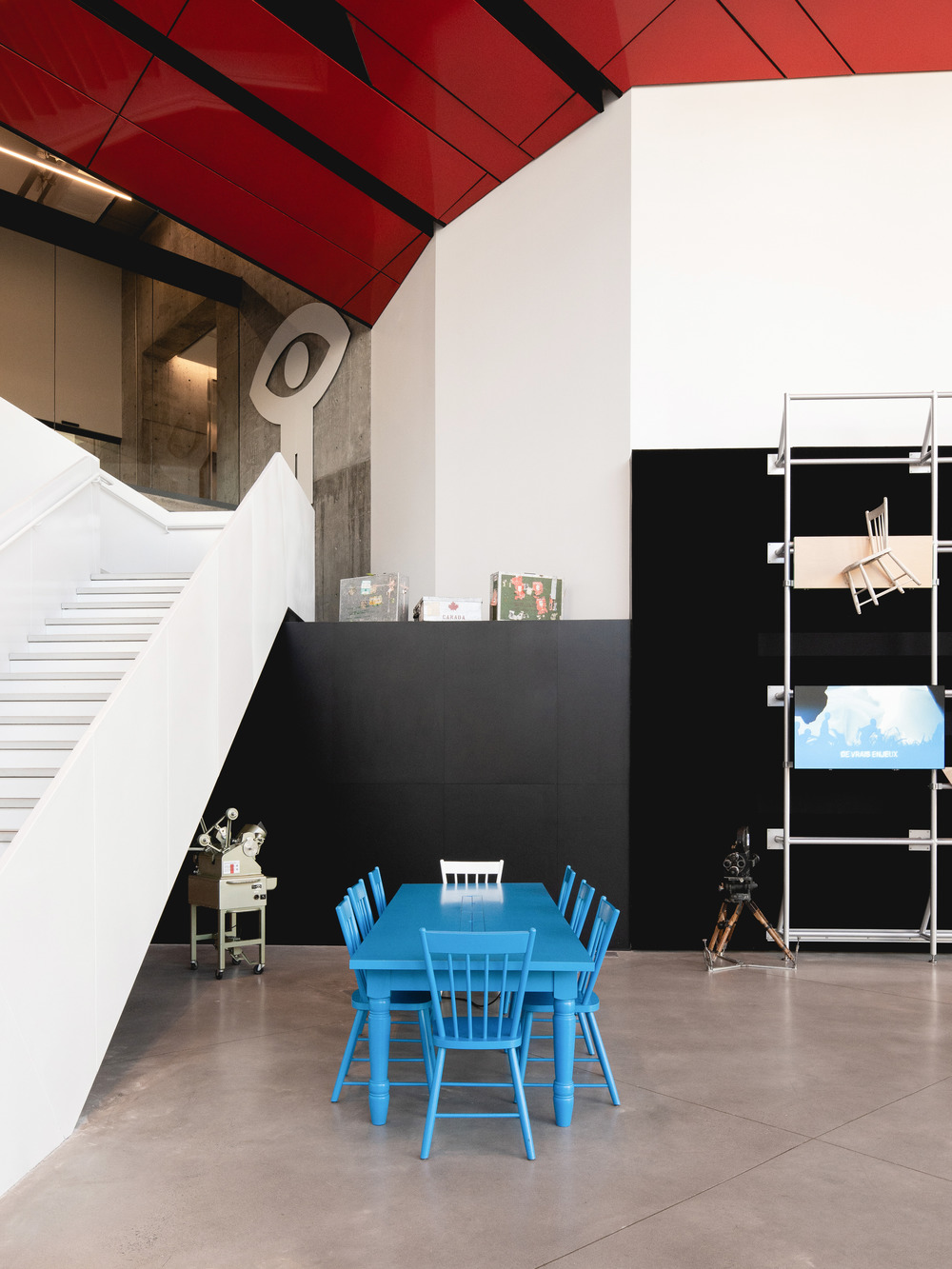 Conceived as a “,” the 225-square-metre lobby also features a media library, viewing room and broadcast booth, allowing visitors to explore NFB programming and history. Meanwhile, the bright furnishings — including modular green vinyl seats that come together to form the NFB logo — are also conducive to casual workday meetings and coffee breaks, as well as the more structured industry events that often animate the space into the evening hours. Framing the room, Taktik’s aluminum tube interior scaffolding easily allows for new exhibits and screenings to be staged. 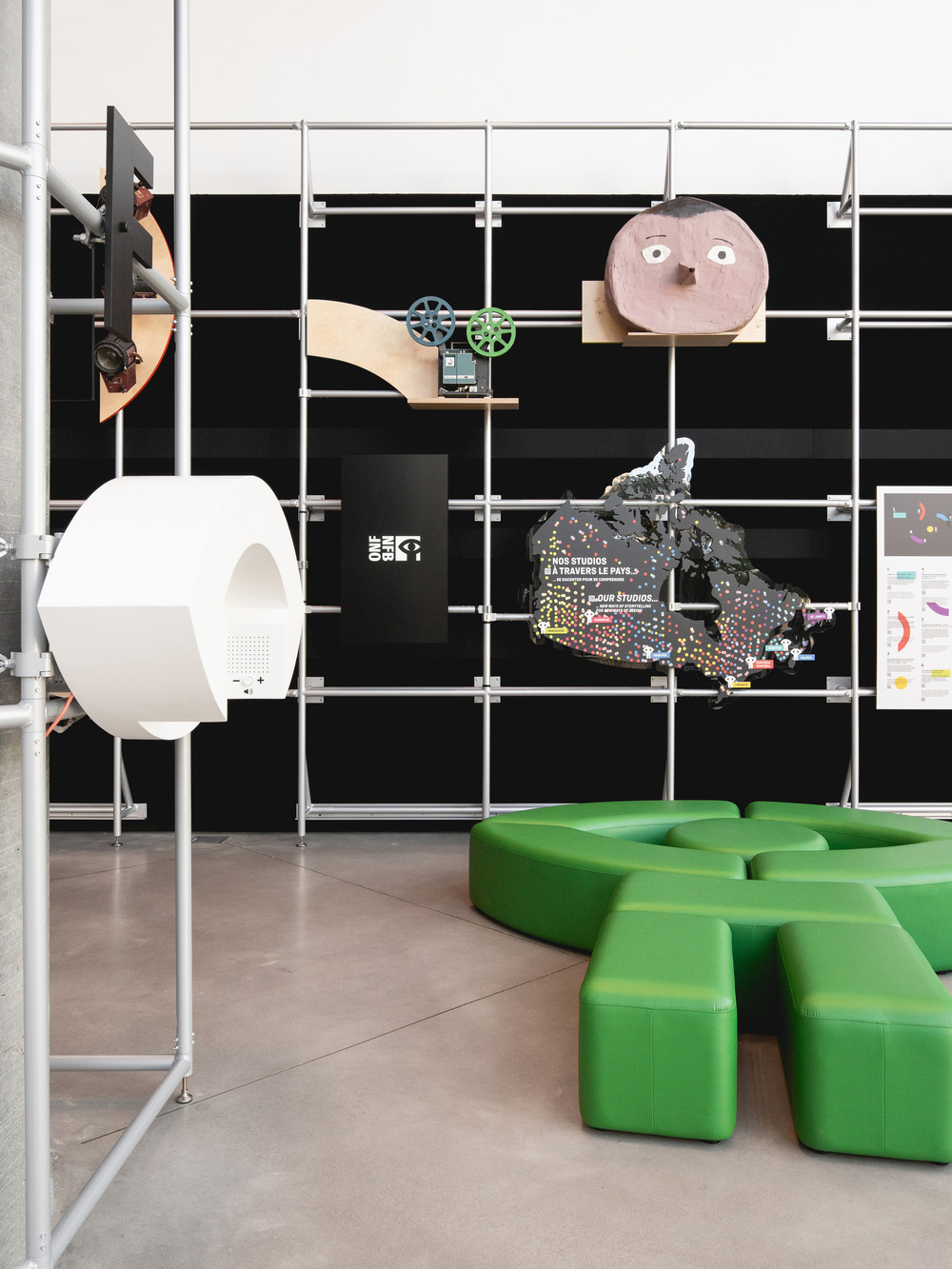 The interplay of bold, solid colours creates a dialogue with the building’s design, with the tower’s otherwise rectilinear form punctuated by a crystalline volume in bright red — a motif that spans from the lobby and atrium to the external facade. And for true NFB aficionados, the blue table’s single white chair is recognizable as an exact replica of the titular seat in Norman McLaren’s 1957 stop motion classic A Chairy Tale. Fabricated by Montreal-based craftspeople, the bespoke furnishings are also easily movable, and can be reconfigured depending on the occasion. 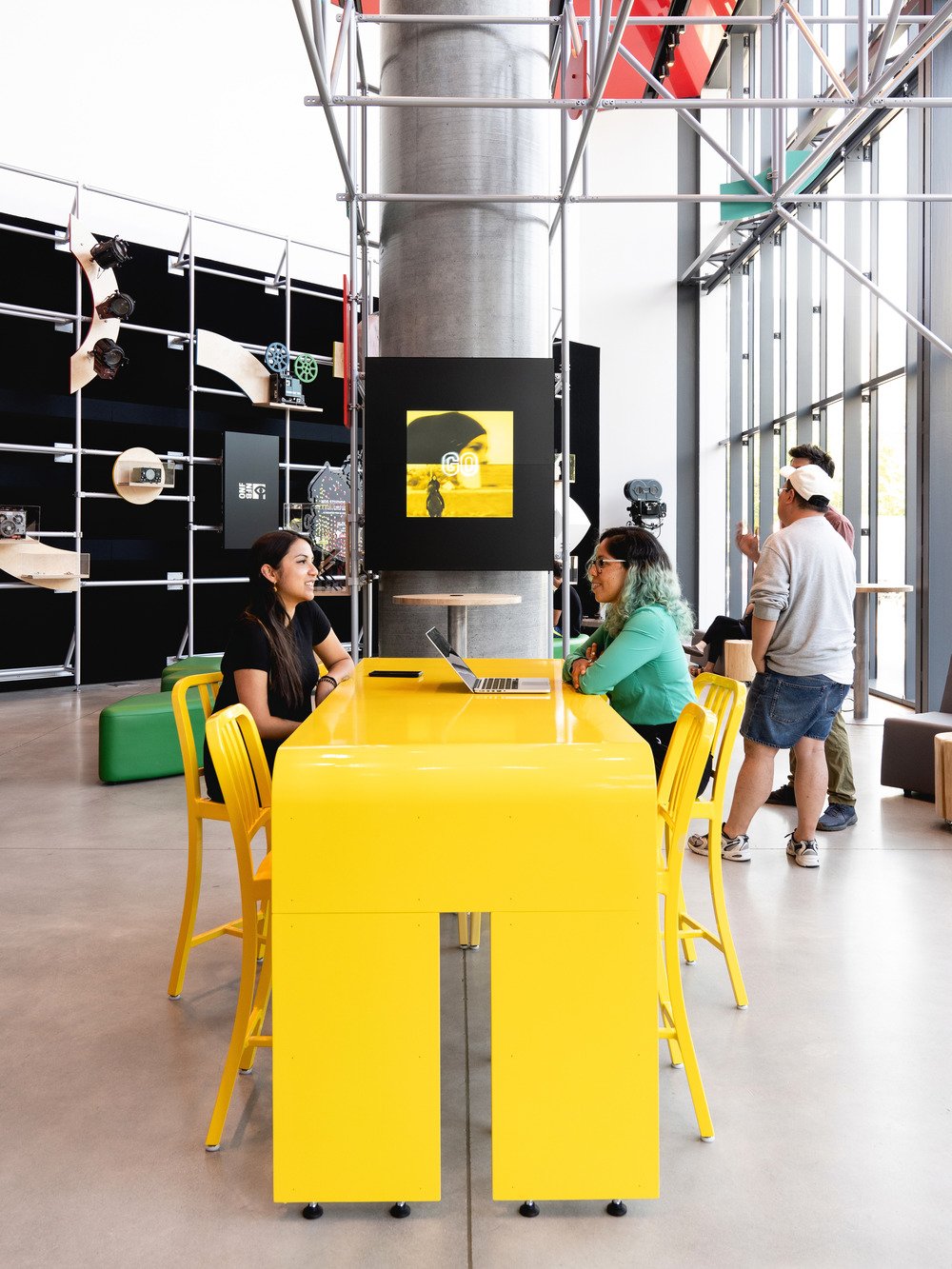 Whether a place of respite for serendipitous tourist visitors, a place for a casual workday meeting, or a mecca for film lovers, the eclectic lobby is a showcase of the NFB’s avant-garde identity and its manifestly public purpose. For the Quartier des Spectacles — and the city of Montreal — it’s a seamless fit. 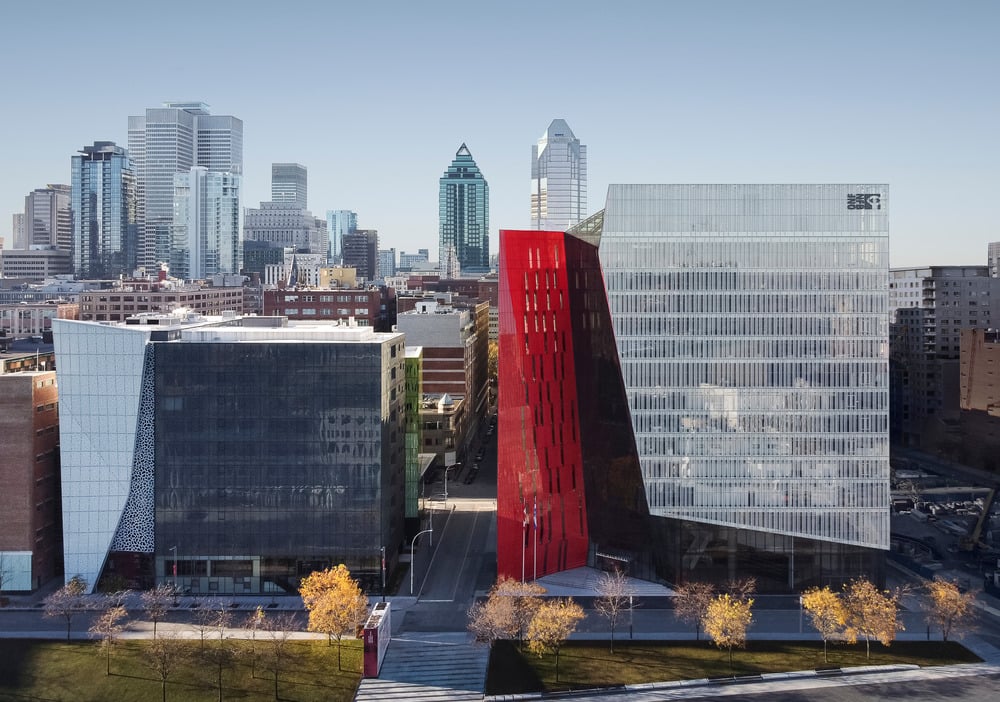