A Synagogue in Kyiv Unites Ornament and Minimalism

In taking over the first floor of a residential building in Kyiv, Ukraine, the PAINTIT had many constraints. There was the 120-square-metre site itself, which had to be gutted, and then there was the brief. The place they were commissioned to create was a synagogue, which has its own spatial rules. Plus, the client wanted something extra special, tasking the firm with the directive: “Make it so beautiful that I don’t want to leave here.” 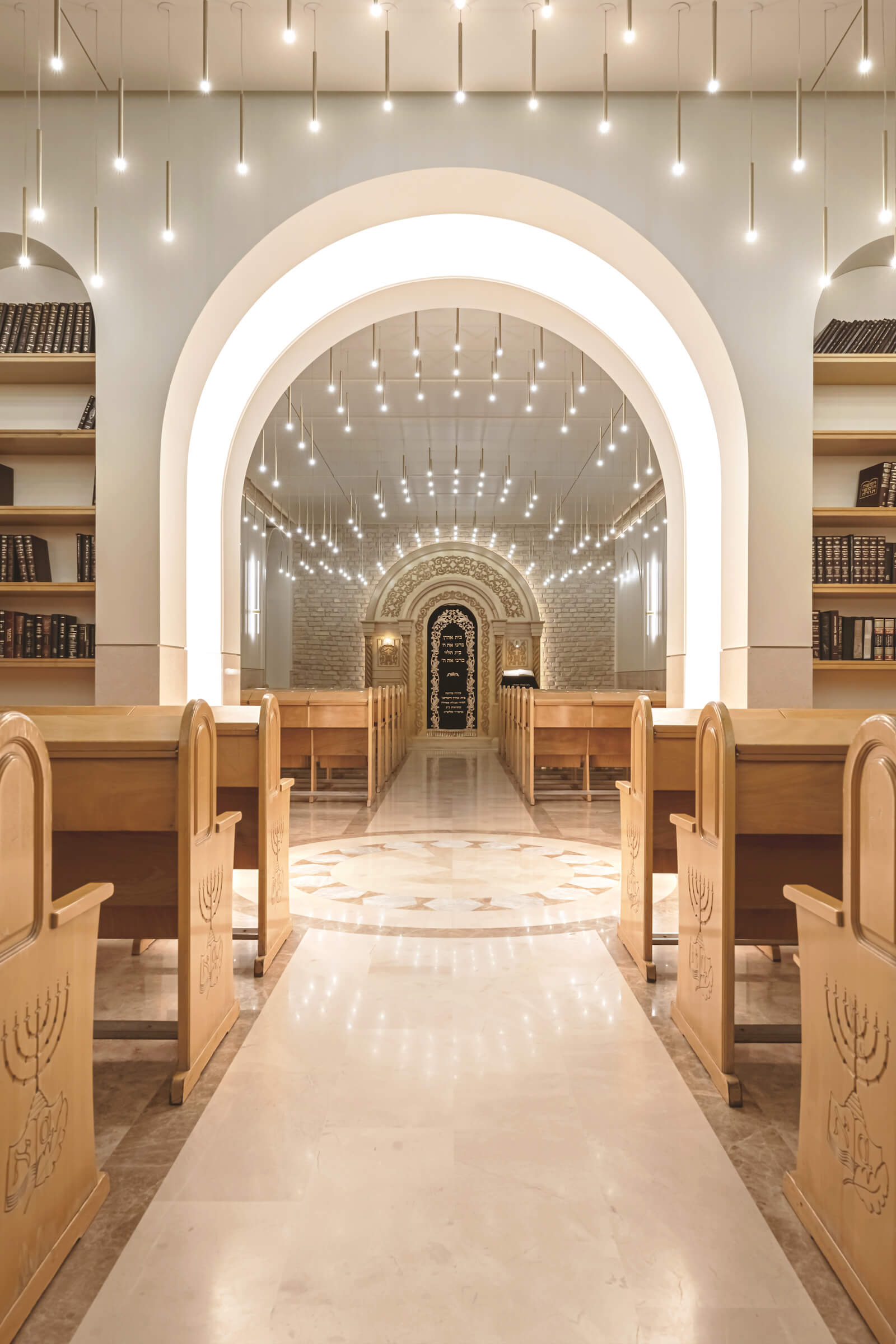 Completed in 2021, the synagogue is certainly a place you want to linger in. “We decided to rethink the interior of the synagogue not through rich decoration, but through the ratio of minimalist forms, the play of accent light and geometric rhythms,” the firm explains. The recurring motif that the firm based much of their design on is the arch: each window is framed in an arch, which is also the shape that envelopes the Aron Hakodesh, or ark – the most important part of the synagogue, where the Torah is kept and sermons are delivered. 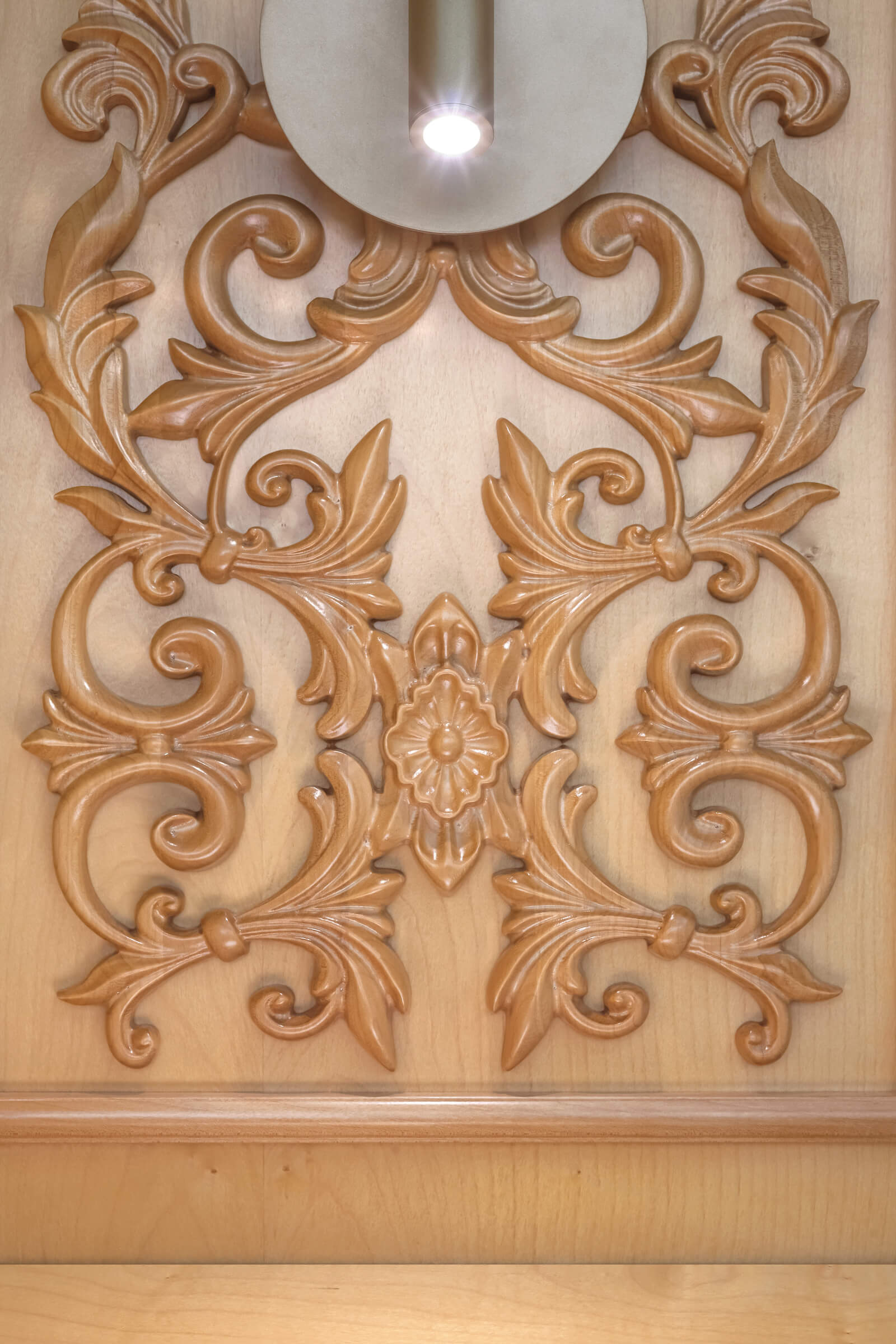 Here, the designers restored the original wall — brick by brick — and created an ornate wood carving, a decorative flourish in an otherwise minimal interior, that surrounds a verse of Psalm 135.

Symmetry was also important in making this area central. “Everything is very symmetrical and indicates that the Aron Hakodesh is the main element of the interior,” the designers explain. “Even the lamps, repeating the shape of the arches, eventually come to be the most important element of this interior.” 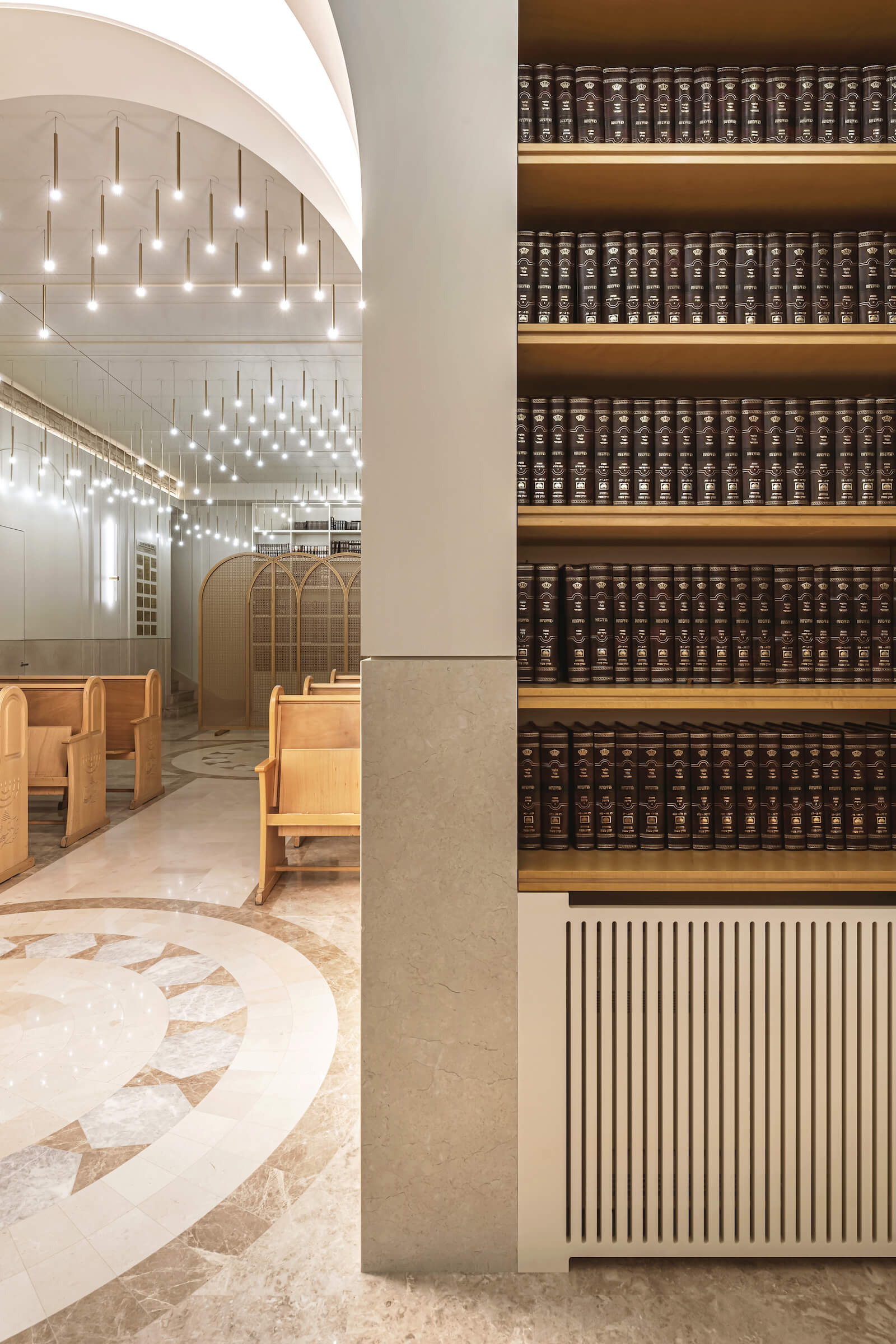 The custom-designed light fixtures evoke candles. Four hundred and eighty of the slim tubular pendants are suspended from the ceiling. “One of the main requirements of the client was for us to create as much light as possible. At every meeting, they said, ‘more light, even more, because we are constantly reading.’” 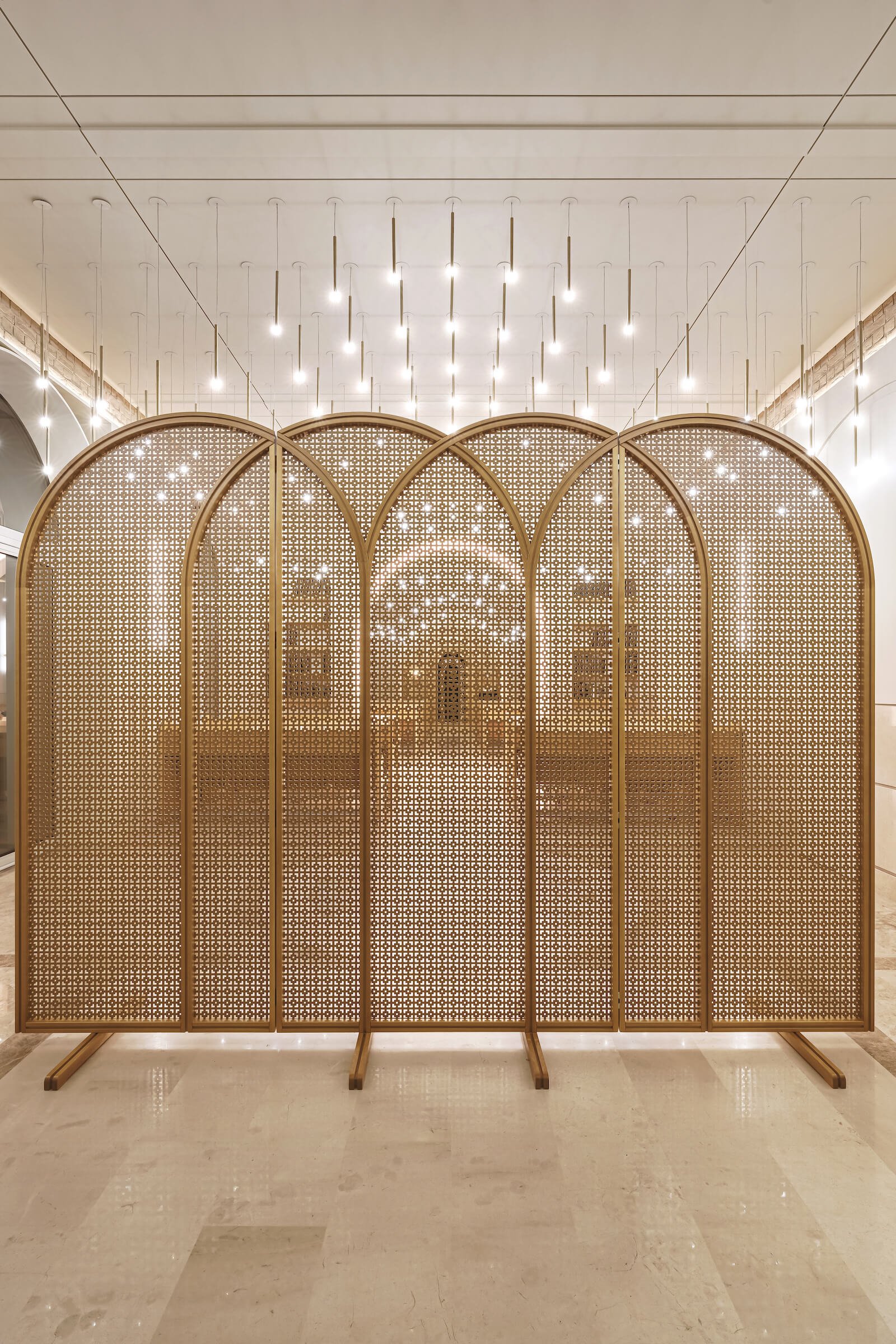 Congregants can take a Torah from the bookshelves and sit at pews with seats that fold out. The benches, carved with a relief of the menorah at their bookends, feature a subtly inclined top shelf where they can rest their belongings. There are two zones, one for male and one for female worshippers, separated by an arched wall (and which can be further visually delineated with an ornate screen). In between the two areas is a “rosette” inlaid into the floor; it is made of marble, which also lines the walls alongside the pews. 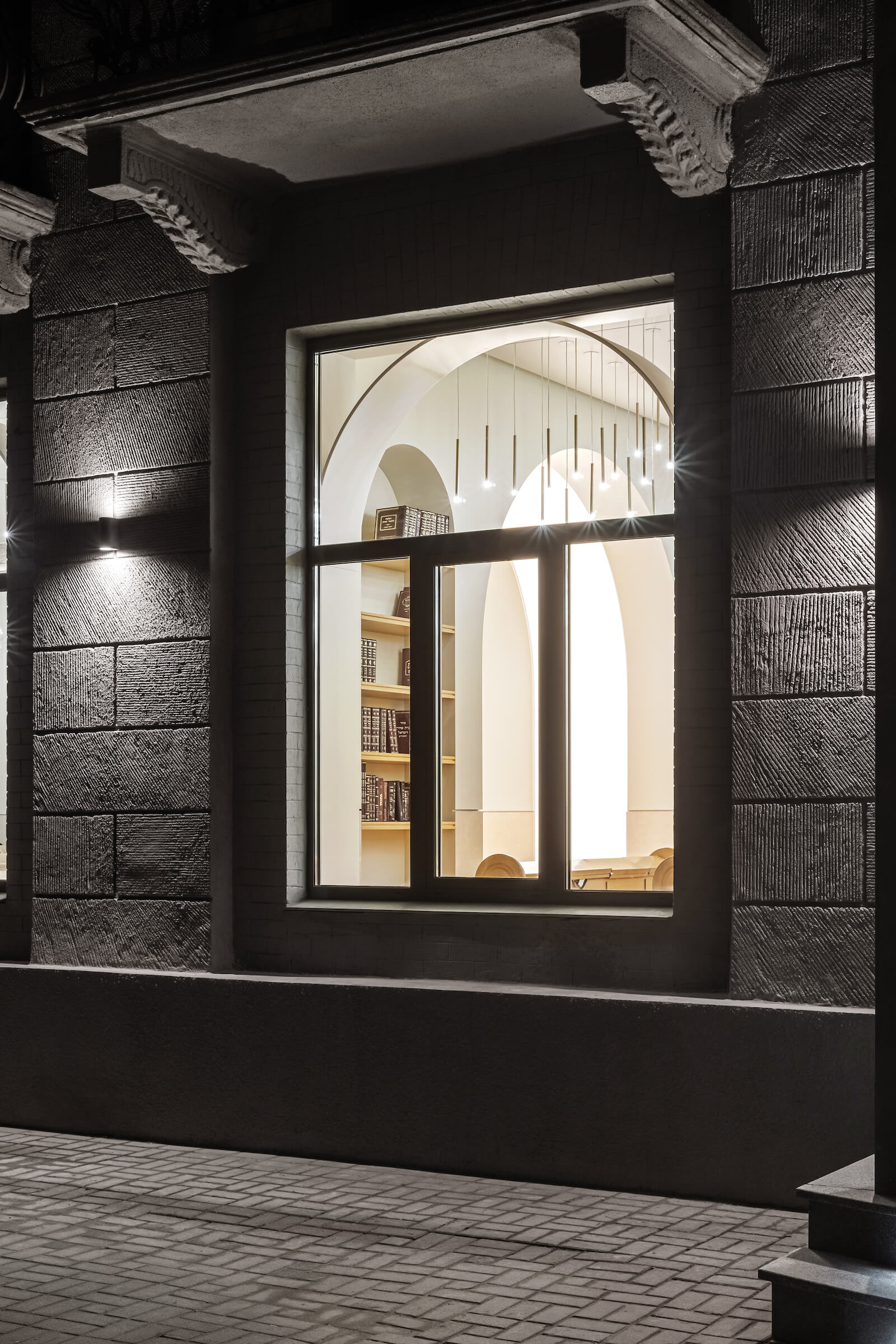 In completing this beautiful synagogue in Kyiv, PAINTIT has emerged as one of doing commendable work in a time of desperation.