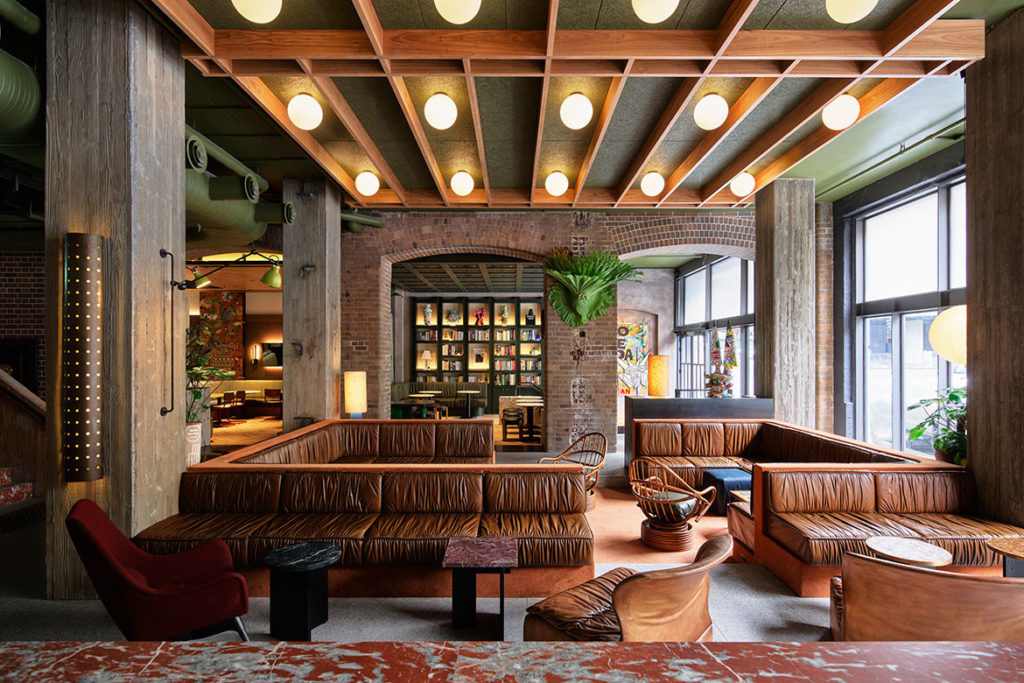 There is a monumentality to the scale of a Flack Studio project that is arguably scaled to David Flack himself. A tall fabulous man in groovy sneakers, Flack is of the ilk that is comfortable in his own skin and will always bring out the best in those around him.

That said, Mark Robinson, Flack principal, is pretty damn fabulous too, with a cinematic eye that contextually frames those oh so right/ oh so wrong Flack Studio design moments.

The latest project from the studio is the Ace Hotel in Sydney. Colour is a dominant theme with Albert Namatjira’s palette of smoky blues, iron rich soils of the central desert and eucalypt in all its vagaries of grey/green, green/grey.

Modernism is also evident to some degree as a nod to Robin Boyd’s The Australian Ugliness, in that decoration (featurism) has been foregone in favour of large swathes of colour or texture, simple yet grand gestures and large open corridors that direct and channel flow.

Terracotta tiles, sandstone feature walls and an ochre-red marble staircase leading from the ground floor to level one are paired with oak, brick, leather, raw concrete, steel and marble.

There is also a bit of ‘everything should have its proper place’ in the highly considered arrangements of bath and guest rooms, which is often attributed to modernism but dates back as an idiom of the Georgian era.

Furniture is where things really get going and it is here that the scale of Flack comes to mind. These are not spindly lobby chairs and slight sofas designed to look great and give five minutes of respite. No.

These are big comfortable expanses of thick warm leather in tones of eucalyptus, leaf and bark. Custom designed and ruched to push the bark analogy further, the brown leather is pinched into corrugations and pleats that ripple across the leather surface. Conversely, the green leather is buttery smooth and welcoming.

Then, in a big move typical of Flack, he doesn’t add a lovely grey sofa. Rather, he adds a pair of big purple chairs that are astounding. Turn a corner and a rich claret red armchair has never looked more at home.

Moreover, Flack is clever and while the majority is designed by Flack Studio and colleagues, the occasional piece by the likes of Noguchi or Scarpa, sets the stage of good company and raises the bar just that tiny bit higher.

The rooms are fabulous, which is a bit of a given, but they are also just that tiny bit strange with straw panelling not a well-remembered seventies motif. Given that there are 270 rooms it is impressive to note that each room has its own seating whether vintage, custom or daybed.

David Flack has also curated an art program for the hotel with works by darlings such as Nell, Tony Albert and Jason Phu.