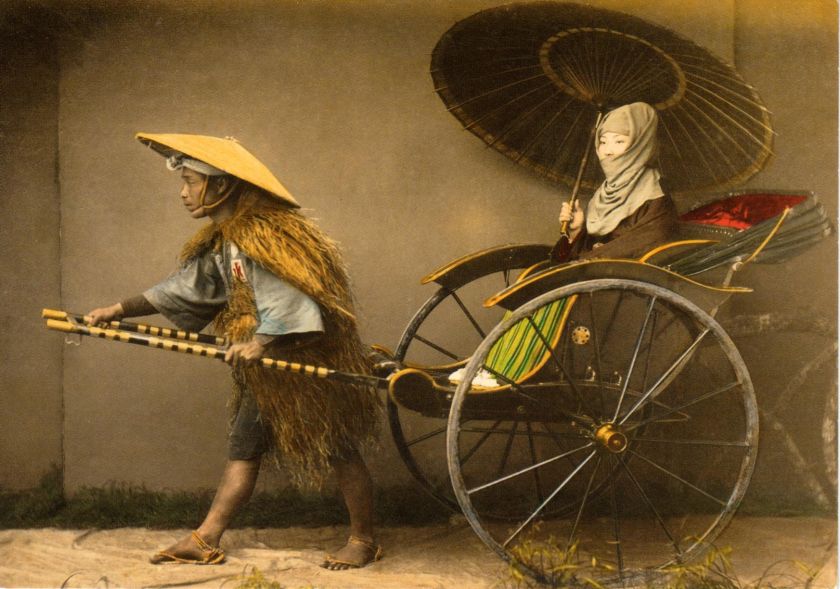 An ‘exotic’ photograph from Lau’s book Picturing the Chinese: Early Western Photographs and Postcards of China.

In the Chinese calendar, 2023 sees in the Year of the Rabbit, and photographer Grace Lau was born under this zodiac sign. Her themes reflect the attributes of the year, with creativity and sensitivity, and are full of surprises.

“The outsider in society is rejected because they represent a threat to the values and stability of that society,” wrote Ken Kesey in his book One Flew Over the Cuckoo’s Nest. This is certainly true of Lau’s work. She says that “being Chinese, a feminist photographer, and over 70 years of age places me outside the mainstream.”

Her intent is to raise awareness of stereotyping and prejudices, to encourage questions and debate, and to respond as an artist to social issues. has been exhibited widely, including at the National Portrait Gallery and Tate Britain in London, Photofusion London, Turner Contemporary Margate and Aberystwyth Arts Centre, Wales. 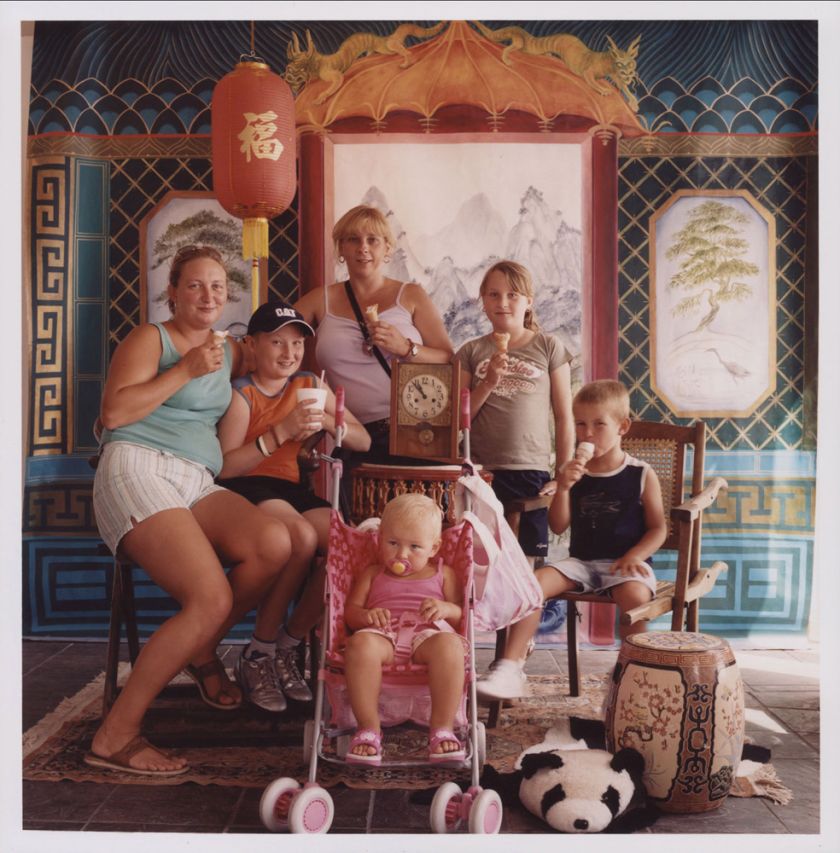 Reversing the roles. Seeing the British as ‘exotic’.

Her latest work looks at issues of race and imperial history, using the example of Westerners’ archival photographs taken in China during the 19th century. In 2004, Lau was commissioned by Joint Publishing in Hong Kong to write an illustrated book called Picturing the Chinese: Early Western Photographs and Postcards of China. It tells the story of Western photography in China, with events such as the Opium War and the Boxer Rebellion – the images photographed provided some of the first images of China by British photographers.

Lau decided to turn the trope on its head – as a photographer of Chinese heritage, she would create images of the British as ‘exotic’. In 2005, with an Arts Council grant, Lau created a portrait project using a Victorian Oriental portrait studio that was set up on the Hasting seafront, and passers-by were invited to come in and have their picture taken.

“By reversing roles, I had become the Chinese photographer documenting the exotic modern Western subjects in Hastings as 21st-century types. They saw a female Chinese photographer in a very exotic studio with a sign saying Free Portraits Taken and they wandered in. That’s what I wanted – 21st-century modern types with their plastic bags, sunglasses, and mobile phones.” 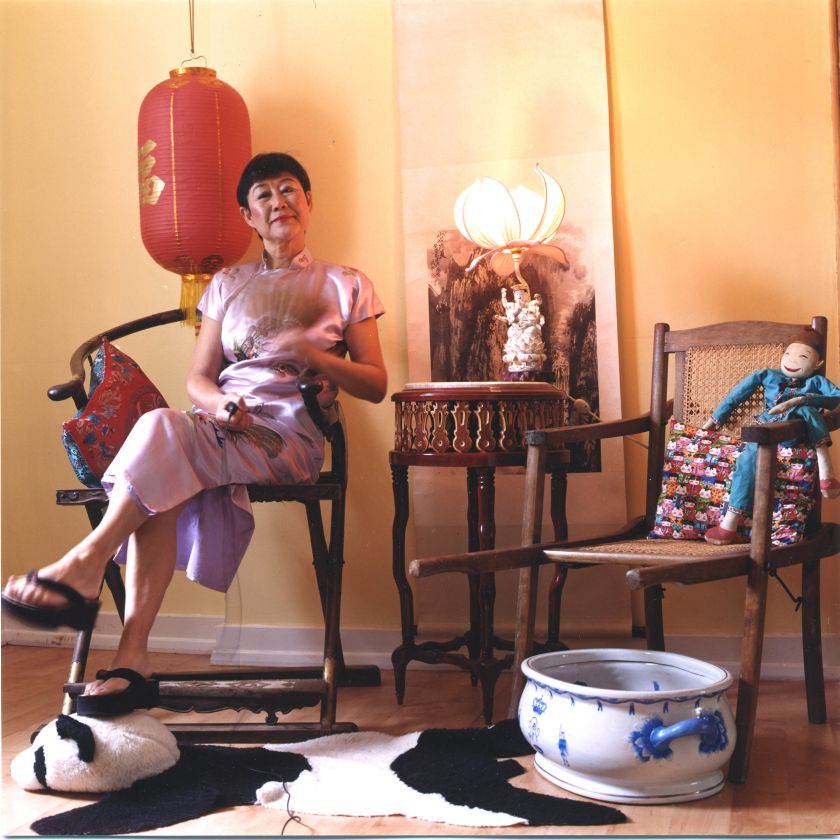 But it was a little more subversive than that, says Lau. The photographer sees it as a comment on how Europeans used to look at the Oriental’ other’. “I did a reverse take on that putting the exotic ‘other’ Westerner into my studio and taking their portraits. It addresses subversive racism, and at the same time, it’s also about portraiture in the 21st century – how people project their identities and roles.”

Lau also sees it as a continuation of her former work – a fetish project. When she was studying for her BA photography degree, she was looking for subjects to photograph. A friend took her to an underground fetish club in Soho. “It was really gobsmacking seeing people all dressed up in their leather, rubber, and with edgy sexuality – but no actual sex was going on. They were play-acting dominant and submissive roles, so there were slaves and mistresses, girls in splendid outfits with lace and feather.”

The ten-year project, which involved visiting underground clubs, parties and events, resulted in her book Adults in Wonderland, published in 1997 by Serpents Tail. As Lau recalls her observations at the fetish clubs, “There were people from all walks of life – MPs, judges, taxi drivers, and teachers – people who had responsibility in their lives who perhaps wanted a bit of irresponsible play-acting roles. A contrast to what they have to deal with in their ordinary lives.”

Lau is a voyeur, an outside eye, an interloper who casts her Hasselblad lens on different worlds. “I’m always looking to see how the ‘other’ regard themselves and how the ‘other’ can look back at the mainstream. There was always an edginess to my work. There’s an investigation going on. A voyeur is a good term to use as a photographer – they are not just pretty pictures but looking into a darker aspect of society.”

Lau says that as a photographer, she creates a disturbance in the status quo “to provoke questions and encourage people to be more curious about society. Not to take things for granted or be too comfortable. To create a little ripple on a calm sea.”

Her parents were refugees from the Communists in China and came to live in London during the 1930s. Her father was a diplomat, and her mother a poet, so Lau was brought up in an intellectual and artistic home. Her father was a gifted Chinese calligrapher, and their Hampstead residence was often filled with Chinese philosophers and artists who were lavishly entertained at the Chinese banquets they held. 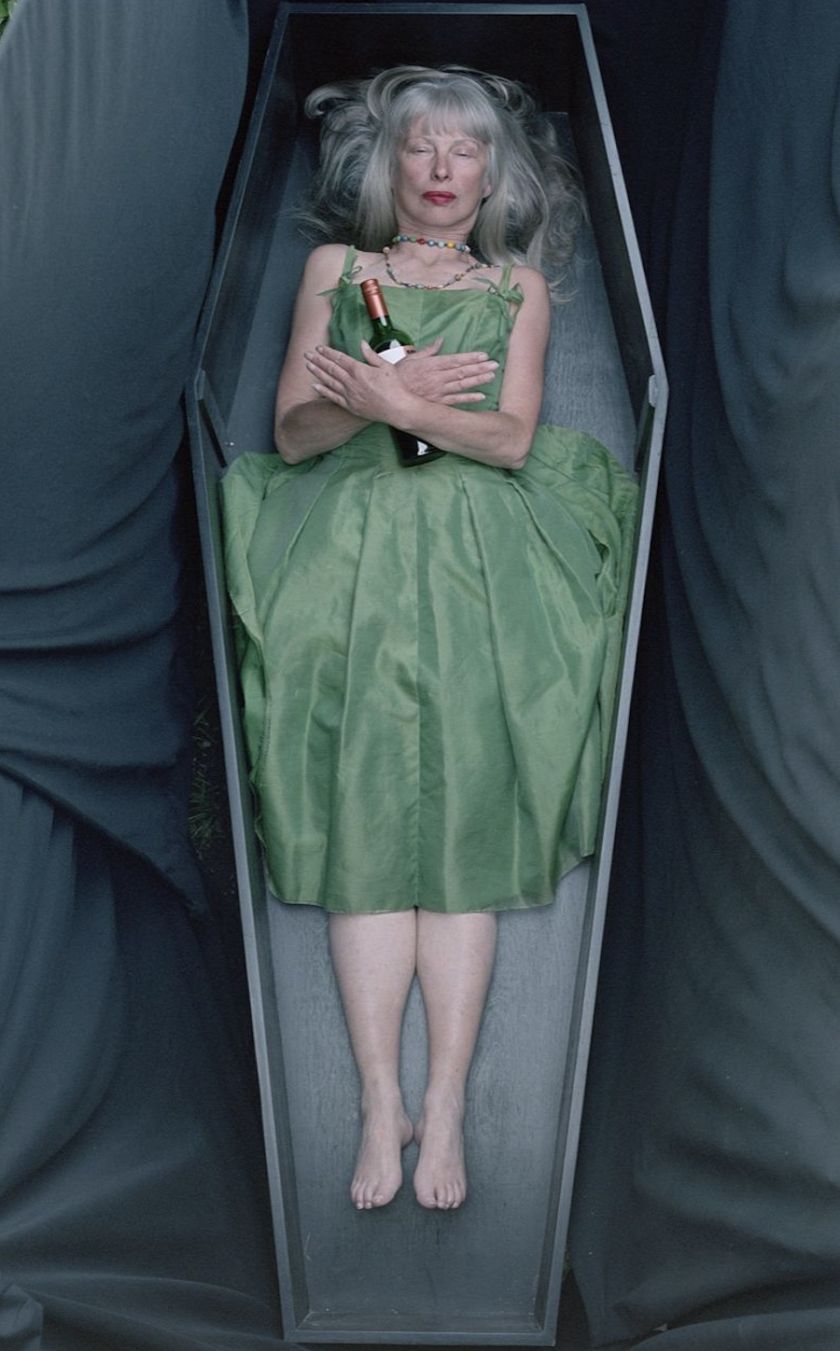 This is Lau’s favourite death portrait. Judy likes her wine and is wearing her favourite dress for this portrait.

As Lau explains: “They were not the Chinese from the restaurant society; they came over earlier, due to political and civil unrest in China – they came with a group of intellectuals who were fearful of being persecuted.”

Perhaps because of this early experience and her parents being refugees from an oppressive regime, Lau says she is drawn to photographing fringe society rather than the mainstream.

“For instance, I don’t like doing wedding or baby photographs, and I have been asked to do this many times. I’m afraid I just can’t do it.”

So if you want your child portrayed in a cutesy way, don’t ask Lau to shoot the picture. “I have to look for something a little more edgy and dark, so when babies cry – that’s my portrait – not when a baby is cooing. I’ve done a few wedding portraits, but I’ve always taken the shot when people were falling over or when there was a little bit of a mishap – something they wouldn’t normally show in a photo album.”

As a result of this time of grief was another photography project entitled Ad/dressing Death, a series of portraits of people posed in a specially made coffin, wearing their favourite clothes and holding an item they would want to take with them.

But this project had a strong effect on Lau, and after taking a few portraits, the photographer decided to call it a halt as “it became a bit too morbid for me.”

Lau is returning to her theme of photographing the British as exotic. She is travelling to Southampton for the start of the Chinese New Year on 22 January. The photographer says the seaside town “has a very diverse society, so I will set up my studio there to offer portraits to all the shoppers coming to the town centre and those celebrating Chinese New Year.”

2023 sees in the Year of the Rabbit, and Lau was born under this sign. In Chinese culture, the rabbit is a symbol of longevity, peace and prosperity. 2023 is predicted to be a year of hope. People born in the year of the rabbit are believed to be vigilant, witty, quick-minded and ingenious, much like Lau’s thought-provoking photography projects.

Grace Lau: Portraits In a Chinese Studio is presented by John Hansard Gallery, Southampton, as part of their .