Stripped back, amped up: Joyce’s gym 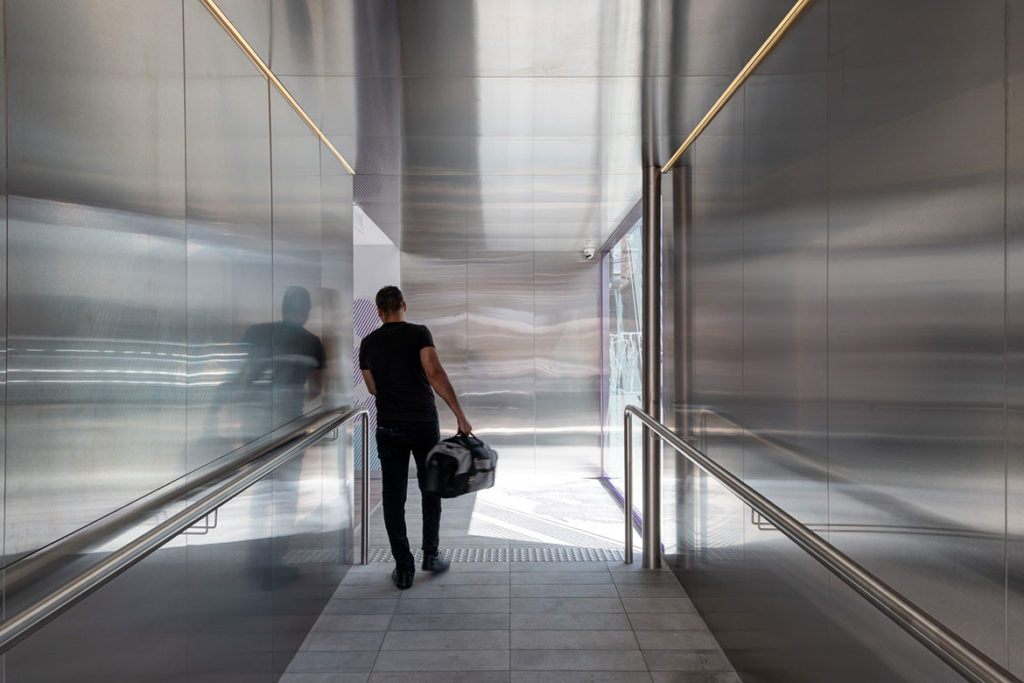 Gyms are regularly found in basements or, more recently with COVID-19, above retail shopping strips. Filled with equipment and blaring music, it’s the amount of sweat poured from one’s body rather than the environment that makes you feel great. However, a new gym by Joyce Architects, located in the centre of Geelong, has created a ‘paradigm shift’. And, given the extension to the original footprint is only a few square metres, this is a remarkable achievement.

Bordered by busy thoroughfares (Moorabool and Ryrie streets), the decision from the outset for Swiss-based company Anytime Fitness, was to relocate the main entrance to the relatively quiet rear enclave of Shorts Place South. “It’s the first contemporary addition to this streetscape,” says architect Tarryn Joyce, director of the practice.

For Joyce, whose brief only really extended to the rear, and now front, entrance, may be declined by architects looking for larger-scale work. However, Joyce and her colleagues could see the potential to reshape the three-level building and make it ‘considerably more’.

Given the gym is open to its members 24/7, one of the architects’ first priorities was to create a level of transparency that would not only redefine the gym, but as importantly, create a ‘veil’, where those working out could see down the relatively narrow street as part of its passive surveillance.

The stainless-steel mesh screen or ‘curtain’ allows sight lines through the building and across the lane, the latter being possible for the building’s slight northern egress. A large picture window at ground level that frames the reception area also increases the sense of transparency.

Entry into the gym is also a pleasurable change from walking down a series of stairs to a basement. Lined in stainless steel, including the walls and ceiling, there’s a sense of walking into a cave. “At night, when the lights are on, the façade creates a lantern effect. And during the day, when there’s less visibility into the gym, the reflections mainly come from the stainless-steel blade wall across the façade at ground level,” says Joyce.

Although Joyce Architects has only actually created a new facade, the effect on those using the gym is considerable. Whether using the exercise bikes on the mezzanine level or lifting weights, each level allows for soft and muted light to permeate each floor. And while there’s artificial air conditioning, Joyce was mindful of including operable windows behind the mesh screen for cross ventilation. “At night, there’s the opportunity to purge the hot air,” says Joyce.

As Joyce was working with a Sydney-based team who represent the Swiss firm, only a few cosmetic changes were made to the interior. However, even though the parameters in which Joyce was able to work were relatively minimal, each manoeuvre was considered to the ‘Nth’ degree.

The front glass door, for example, slides away into a cavity wall during the day and closed at night when greater security is required. The stainless steel itself was treated more like precious material rather than an industrial element – the edges of the stainless steel express the stainless-steel bolts that create a poetic edge. Shadow lines are executed to the max, with each structural element beautifully aligned behind the mesh veil.

“It might just be a gym but that doesn’t mean that you have to feel claustrophobic, surrounded by darkness,” says Joyce, whose contribution to the streetscape will also activate further gentrification in this part of town. And rather than try and negotiate traffic, including buses using the main thoroughfares, patrons can enjoy entering a quiet and unused street and simply reflect on the day ahead or the day that’s been.