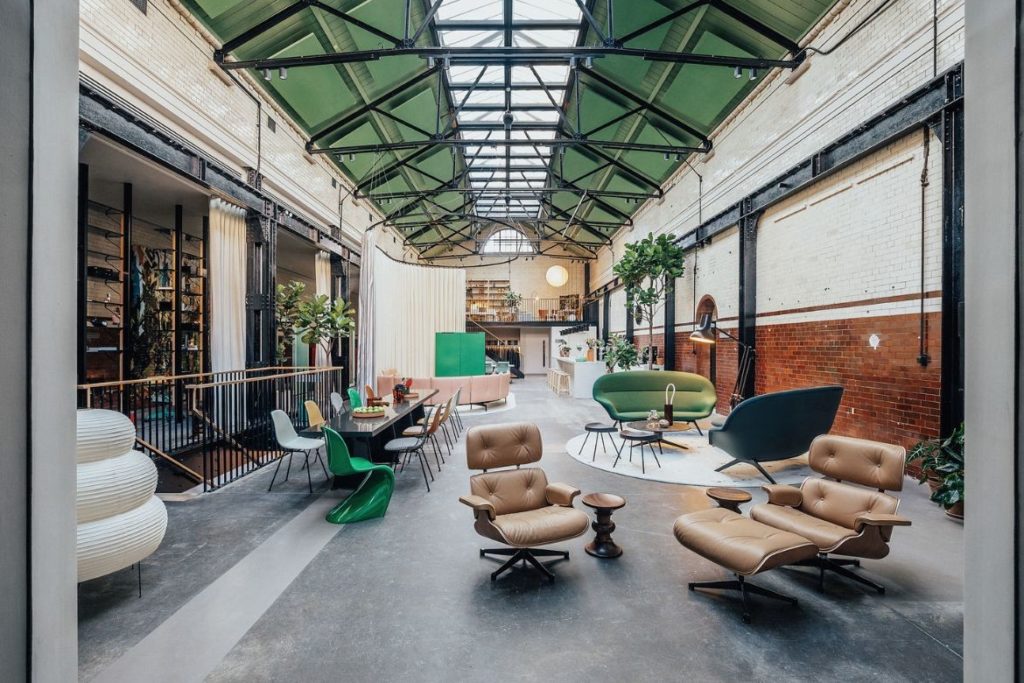 London’s Tramshed building in Shoreditch was built as an electricity transformer station for the Eastern London Tramway in 1905 but will probably be forever remembered for its first incarnation as a in 2003. Diners feasted on a succinct menu of steak or chicken by chef Mark Hix in a cavernous space — all overlooked by a stuffed bull with a cockerel standing on its back in an enormous tank of formaldehyde perched high atop a pillar.

The pandemic put an end to the restaurant, and Cock and Bull – as the Damian Hirst artwork is titled – has moved on to a new home. Today, the Grade II listed building is home to an entirely different, although just as impactful, display – the new flagship showroom for iconic Swiss brand Vitra.

“We chose the historic location in a lively and creative neighbourhood close to the studios of some of the designers we work with,” explains Till Weber, creative director of scenography at Vitra and the creative force behind the new showroom. “We want to become a part of this local community.”

The 920 square metre space has been divided into three main areas: The Club, The Gallery, and The Loft. The Club on the ground floor is a vision of the workplace in a post-pandemic world, with various zones that showcase how Vitra’s commercial furniture can be adapted to different spaces. At the rear, a mezzanine level is dedicated to the Vitra Home Collection.

Head downstairs to The Gallery in the basement which is used as an exhibition space. For the launch of the showroom during the London Design Festival in September, for example, the space housed an installation dedicated to the ongoing collaboration with the family of French designer Jean Prouvé. Upstairs on the first floor is The Loft, which will be used to host events for clients and press.

The enormous, double-height space was originally designed to accommodate the transformers as well as cranes needed to move heavy machinery. Over the years, it had been divided up to accommodate the dining area and . Vitra carefully removed these insertions to recreate the main hall and clearly structured side rooms, revealing wonderfully preserved brick walls in the process.

“We approached the project with tremendous respect,” says Weber. “It’s a pleasure and a privilege to maintain historical buildings, revealing and showing the traces of time instead of covering them up.” In keeping with this approach, the time-worn cement floor, timber elements lining the old rails along the terrazzo flooring, the characteristic glazed brick walls, and the black steel structures were all preserved.

New elements have been designed to sensitively respond to the patinated fabric of the existing building, while providing a pleasing contrast. Take, for example, the oval curtain that encloses the Soft Work Huddle with a shimmering silver surface that subtly mirrors the colours of the main hall; or the graphic black detail elements that echo the building’s historic black steel elements.

“It was important to strike a balance between a functional showroom that offers a captivating visitor experience and a welcoming place for our team to work,” says Weber. “The response has been overwhelmingly positive – I think people are happy to see the building being reused in such a meaningful way.”