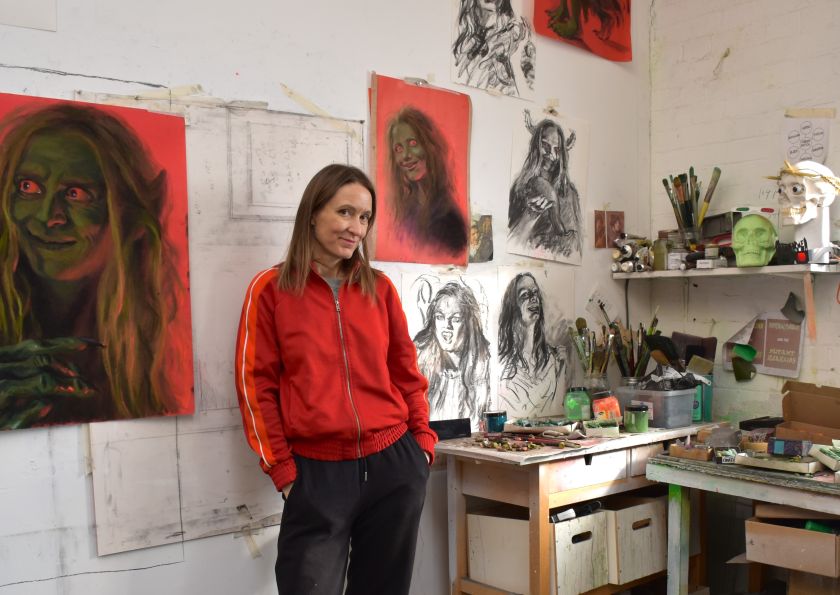 With their portrayal of monstrous women, painter and illustrator was inspired and horrified in equal parts by 1950s B-movies. Here’s how she turned the genre on its head.

During the 1950s, there was a spate of B-movies in America which portrayed women as strange creatures full of mysterious power who threatened to overturn the world’s natural order. There was Vampira in Plan 9 From Outer Space, with her cinched-in waist, raven hair and habit of drinking smouldering, smoky cocktails.

Other sci-fi B-movies of this time had equally lurid names, such as Untamed Women and Attack of the 50-Foot Woman. They were highly sexualised and usually wore a ripped bikini (it’s surprising how many female aliens dress this way).

The femme fatale figure is an archetype in art – the mysterious vamp, which is dangerous and often ensnares her usually male victims. 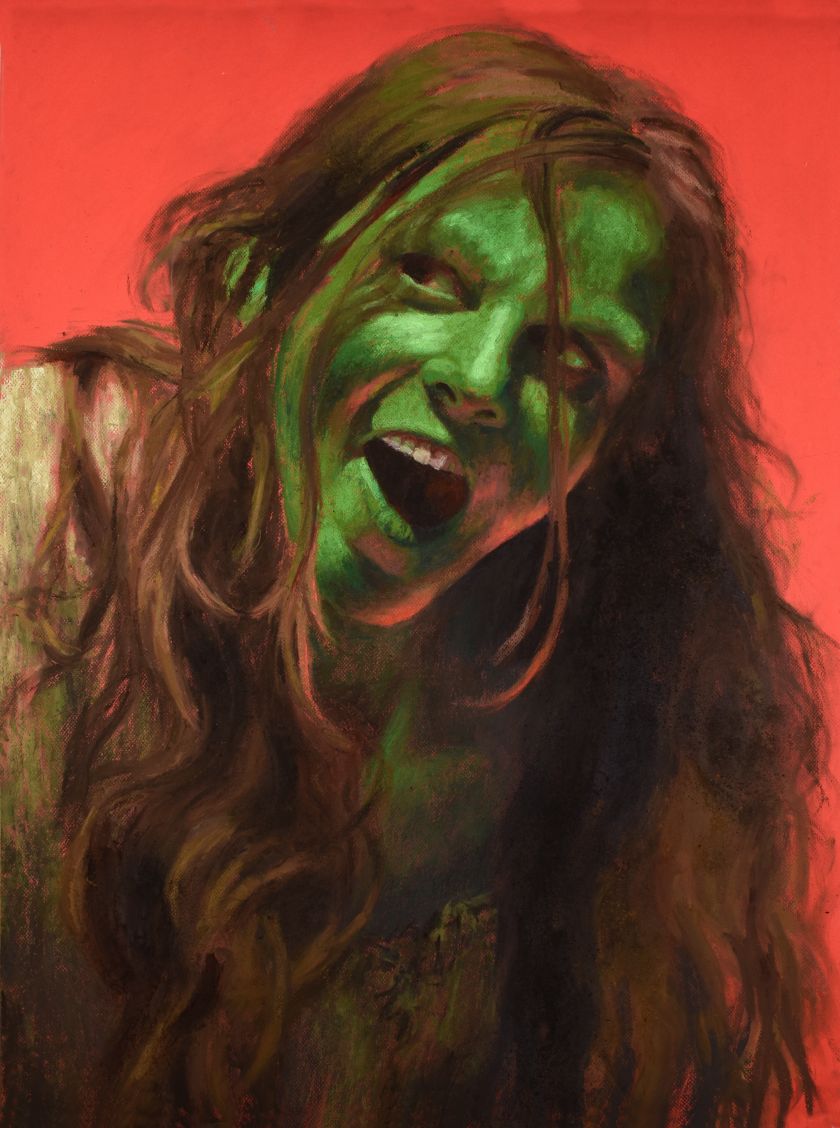 Green with envy? Or the power of nature.

work aims to turn all this on its head. Her exhibition, The Cult of the Green Women, which was recently on show at the Zabludowicz Collection in Chalk Farm, London, upends the stereotype of the dangerous female vamp.

Parkin draws her inspiration from popular culture and films such as the 1977 film Suspiria, an Italian supernatural horror film with its story of the occult and witchcraft. Her sense of the theatrical also comes from her work as a set painter for film and television.

“I was attracted to the language of the posters of B-movies and the way they are forcefully advertised. The posters themselves are really fantastic, and you think exciting things will happen. And then you watch the film, which is dreadful and such a let-down.”

The B-movie had a reputation as a quickly and cheaply made vehicle with little artistic value. As Parkin points out, the posters were often more alluring and with more inventive creativity than the film itself. Think of the tag lines for the movie From Hell It Cam: ‘Born of jungle witchcraft! Created by a Curse!’

For Parkin, it was important to reclaim this view of women as monsters and give it her own twist. She has always been interested in fan and popular culture, which feed into her work. “The coercive and seductive language pulls out all the stops to really draw you in and excite you with all the thrills and spills. The characters are larger than life.” 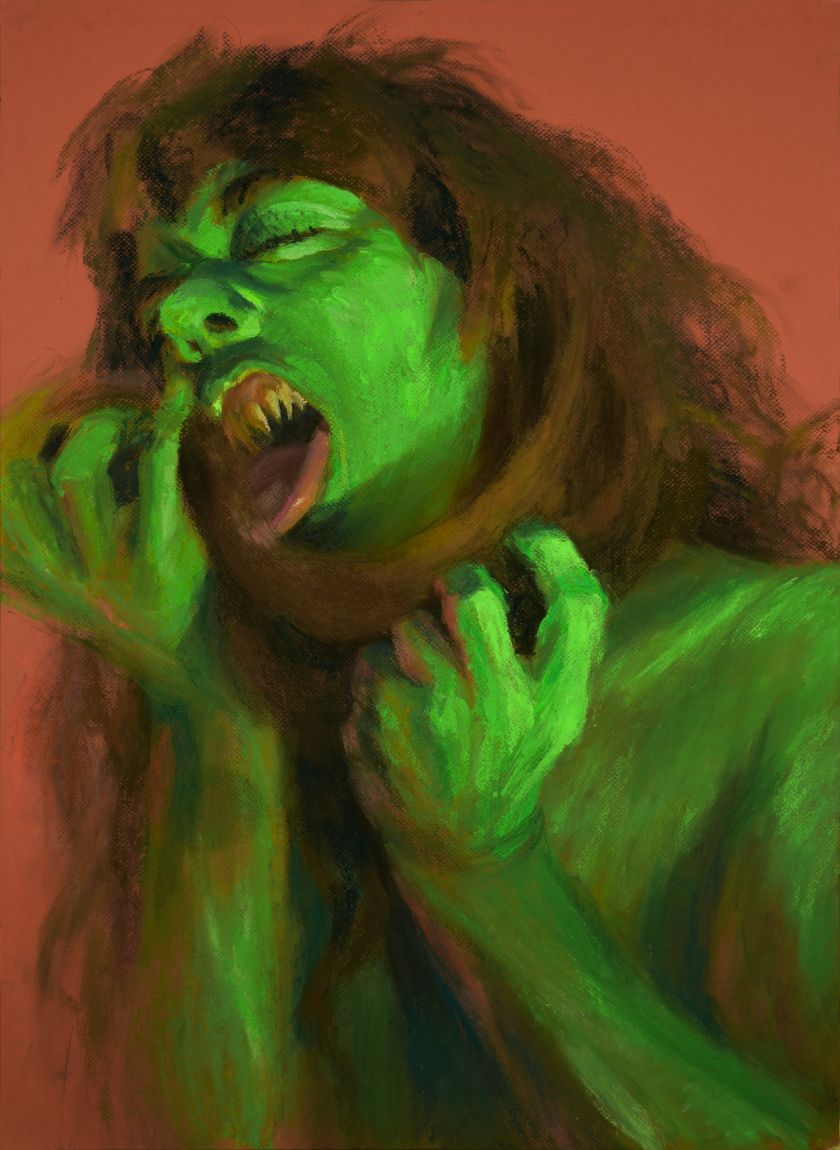 The actors in director Russ Meyer’s films are a particular favourite. The director made a series of sexploitation films that featured large-breasted women in leather boots, such as Faster, Pussycat! Kill! Kill!. The star was Tura Satana, a Japanese-American actress and exotic dancer who once posed as a model for Man Ray, the surrealist photographer.

These films, once criticised for misogyny, have now been reclaimed by feminists. The female protagonists are pretty powerful – beating up any man they come across and expertly driving sports cars.

These feisty women are good examples of untrustworthy females. “Women are demonised. The femme fatale is a vile treacherous woman,” Parkin says. “I was drawn to playing with those archetypes and seeing what I could do with them.”

To create the paintings, Parkin used herself as a model as well as her friends. In the Green Women series, the artist set up photoshoots. “We would put on all this green makeup in stage paint, with costumes and red backlighting. We acted out some scenes, just like a publicity shoot which the actresses would do in the fifties.”

These photographs became the basis for the drawings. Pastels were used on white paper upon which Parkin had already prepared with layers of pink-red ink as the base. It was, at times, a visceral process – “I use pigment raw from the jar and use my fingers to paint it straight on. It’s matt, so the light doesn’t bounce off it, so you can get vivid colours that surprise people.”

Colour theory is an important aspect of Parkin’s work. Green is the colour of enchantment and fecundity. In ancient Egyptian art, the god Osiris is often shown with green skin, symbolising fertility, regeneration and the underworld.

Parkin is particularly drawn to female characters with green skin, such as the Wicked Witch of the West and the Orion slave girls in the Star Trek TV series. 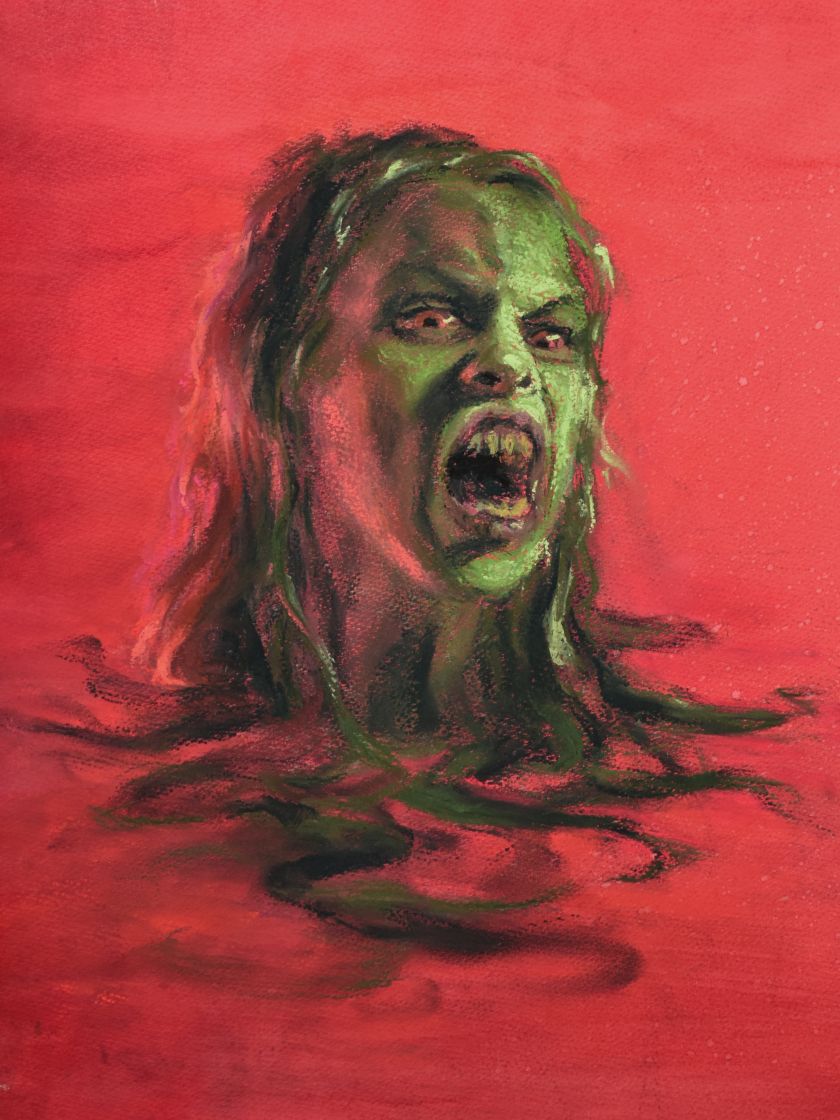 Spearmint nympho – playing with the archetype of the oversexualised woman.

The Green Women series satirises the history of demonising women, taking pejorative terms and reclaiming them. “There is a strong element of parody in that I have chosen edgy names like Bog Bitch, Witchy Snatch and Malevolent Melons.”

The response to Parkin’s work has mostly been positive, although the artist says they have a marmite quality: “You either love them or hate them. I get positive responses from men who think it’s hilarious.”

Parkin studied a foundation course in Chesterfield, Yorkshire, where she is originally from. Coming to London, where she studied for an MA at the Royal College of Art, she found that, as with many artists looking for the big break, the streets were not paved with gold. “I’ve always felt very much on the outside of things, and it’s only in the last year that I felt my career is starting to move along.”

Parkin is in her groove with her disturbing yet playful paintings of green women you wouldn’t want to mess with. 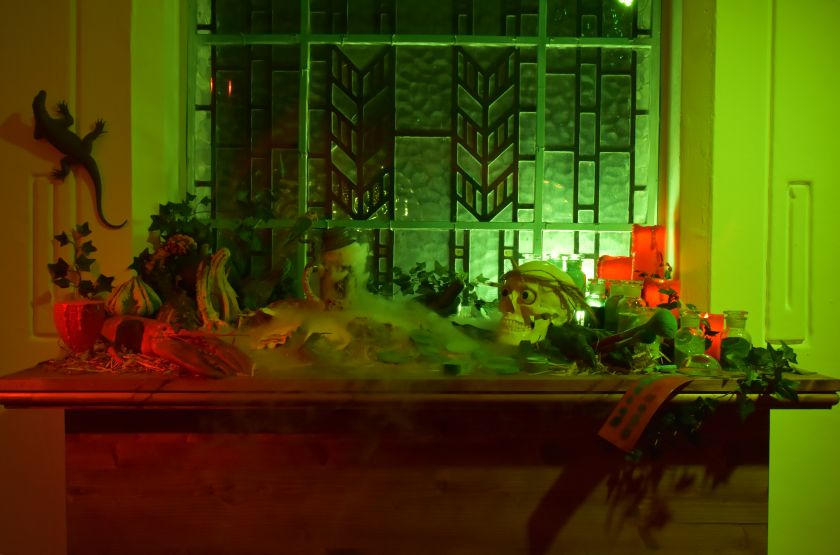 Vanitas installation, with themes of death and decay.