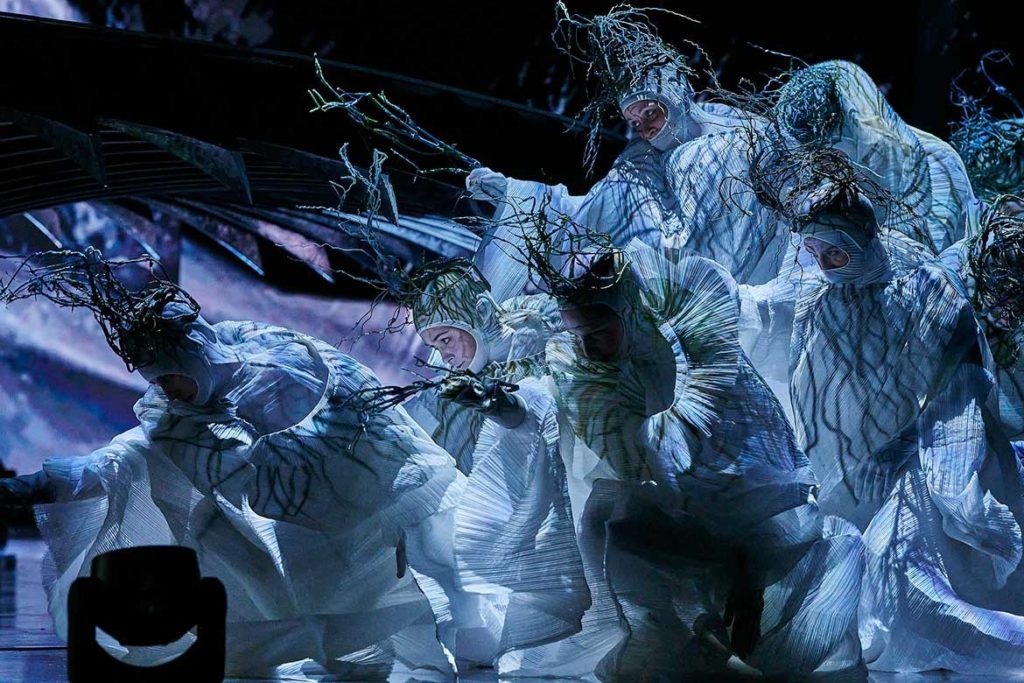 Pushing digital exploration to the full, ‘Madama Butterfly’ is simply extraordinary. Designed by the production designer of Opera Australia, Michael Scott-Mitchell, this latest Graeme Murphy choreographed classic plays out in a world of pivoting seven-metre high LED panels that rotate with moving imagery. “You can very rapidly bring about a whole series of different imagery, moods and lighting states and a whole palette of things,” says Scott-Mitchell, who uses large gestures to visually contain the performers.

The impetus to engage the digital world came from Opera Australia’s artistic director, Lyndon Terracini. “It’s an exciting territory to explore. However, any form of movie imagery within a live performance environment has to be handled very carefully and very decisively,” says Scott-Mitchell, who is well aware that the eye-candy of cinematography can cause a disconnect between audience and performer.

As such, he and Graeme Murphy discussed the need to keep the imagery abstract from very early stages. “I think you need to be really careful that you don’t overwhelm the environment that the singers are in; you need to allow the performer and their costumes to actually push forward, not be subsumed in a fast-moving, realistic, naturalistic environment,” says Scott-Mitchell.

Having first met Sean Nieuwenhuis in New York when they were both working on ‘Doctor Zhivago’, Nieuwenhuis was the first and natural choice for digital content for this production. The process, however, was not quickened by the use of LED. Rather it was long and exceedingly detailed, taking a year before work started in earnest with Nieuwenhuis.

During this time, Scott Mitchell worked with Sabina Myers, who had been one of his students at NIDA, and is currently designing costumes for OA’s ‘The Barber of Saville’. For Madama, Myer created around 600 renders. And that was just to create the palette. “We literally worked for a year exploring different sorts of stylistic ways forward. And then once we’ve settled that, actually storyboarding the entire work, which was to say it was another 600 images,” says Scott-Mitchell.

The result, however, is fabulous, with Nieuwenhuis able to shift and morph the original imagery. “What Sean was able to do with it was remarkable really — and also animating that imagery. I mean, that opening sequence has a lot to do with Japanese bondage….” says Scott-Mitchell of the theatrical shibari sequence. Indeed, it could have gone horribly wrong, but instead, a cultural metaphor and the production’s tone have been established.

The imagery is, in fact, extraordinary, shifting from floating clouds to falling calligraphy, screaming pink to ethereal abstractions. Cio-Cio-San’s apartment is a glass floor raised on samurai swords, and the costumes in red, black and white are astounding. Murphy’s direction is, as always, exemplar. And then Sae-Kyung Rim, in the role of Cio-Cio-San, starts to sing, and the whole coalesces as a feat of extraordinary virtuosity.